On the realisation that we had an extra day in the South Island as our ferry left a day later than we had thought, we decided to spend another day sampling the delights of Marlborough. We mixed it up with me driving us around to our first vineyard before we donned our helmets and Armstrong’d our way around a further 7!

The first place we went to was Te Whare Ra and a place that had been recommended to us by a Danish couple we had met and then bumped into again in Abel Tasman. They had a new wine for us which was a combination of Pinot Gris, Riesling and Gewurztraminer and called Toru which is Maori for the number 3. It was delicious.

After returning the car we jumped on our bikes and headed to Wairau River via a stop at a champagne producer. We ate a lovely lunch in the gardens with a view up towards the hills that feature on the Cloudy Bay bottle. From here it was largely downhill for us as the wine tastings started to take their toll. 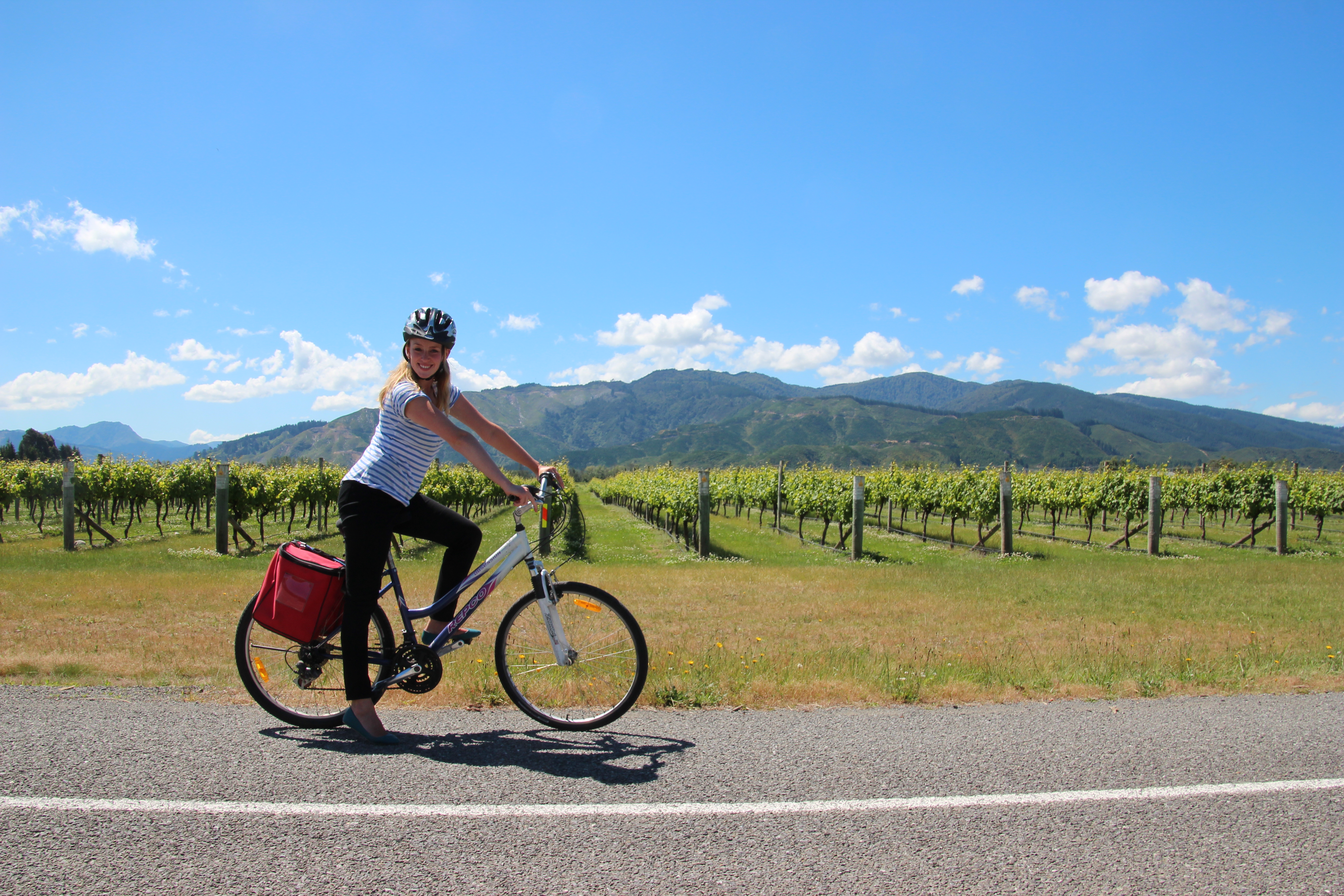 We spent quite a bit of time on the sides of roads taking pictures in the vines as the backdrops were just so beautiful. Cycling around in beautiful sunshine with vines growing and the hills looming in the background was a perfect way to spend our last day in the south island.

We have had so much fun over the last three weeks and covered a pretty crazy 4,500km by car and we had plenty of time to relive some of our favourite memories whilst trying not to peddle out into the road.

After a pretty early night we were up at the crack of dawn to jump on the ferry that would shoot us over to the north island. When I say shoot it was actually a pretty slow trundle that deposited us in Wellington at 12pm with the start of the Ashes set to kick off an hour later. We drove on north with regular updates vibrating on my phone from Joe and Neil as Stuart Broad proceeded to rip through the frail Australian batting line up.

We then tried to stop for lunch and find a pub to watch an hour of this joyous thumping. Unfortunately in the town we stopped in there was one bar and it was not the kind of place that wanted to change the channel from the horse racing to the cricket for an Englishman. A swift retreat and back to the car to take us up to Taupo.

We had hoped to complete the Tongariro crossing but unfortunately the weather was against us so instead we enjoyed a few beers and watched the cricket after I had tried to win us $10,000 by hitting a hole in one in the middle of the lake. With 25 balls and a free ball everytime you hit the green I kept Jen waiting for about an hour but she was kept entertained by a TV star who was also having a go. Some guy from The Almighty Johnsons apparently. The cricket was abysmal and will play no further part in these blogs or at least until England pull their finger out.

The next day we set off a little later than planned for Auckland to see the family once again!