Apologies everyone, the above was for the purpose of search engines and as a review of the trip we went on to help others avoid making the same mistake so don’t hold it against me. Unfortunately I am back which means more food, more sports scores and less good writing. See what I did there?

Knowing that we would be on a bit of a comedown from saying goodbye to Sally and Dan I cunningly devised a plan to book a boat trip up the Mekong River, exploring the delta and then staying on a floating hotel before arriving in the heart of Pnomh Penh by boat the next day. It was either that or a sleeper bus over the rocky roads so what could go wrong?

Before I go through all of this it should be noted that we actually had a really good time on this trip. A good mixture of people on the tour definitely helped. We chatted to some like-minded but older(read retired)  travellers who every year disappear from the English winter to travel around a different part of the world – an inspiration for us all.

We set off from Saigon early in the morning and after being ferried from minibus to bus and back and back again we realised we could have walked about 200m from our hotel to the meeting spot but nevermind. Here we realised that our trip was actually one of several similar trips all running in parallel with some on one, two and three day trips. This would be the cause of some confusion over the coming hours!

The bus rumbled out of Saigon and our first guide introduced himself, part lecherous wedding DJ, part regional comedian, he was a pretty poor guide but managed to get us to the river safely where, after a three hour drive, we were deposited into a lovely old wooden boat and met guide no. 2.

A man of few words our guide let us explore a coconut sweet “factory”  (tourist cash cow), a place where bees are kept and we drank some rice wine from a big jar which on first inspection looked to contain about 50 dead snakes.

On closer inspection and after our first drink we discovered there was also a dead crow in the jar. It was surprisingly tasty. The rice wine not the crow.

We were also promised a look at an active floating market with deals being struck, fortunes made etc but saw about three boats moored together with about 7 men all having a fag. Not exactly what we were expecting.

We thought we were going to be paddling around in a sampan in one of the quieter areas of the Mekong  but apparently only three day and one day trip people could do that. Shame, as it was only thing I was looking forward to doing.

Our boat ride almost complete we had time for a little cycle on one of the islands in the Mekong River and to taste some local food. Fresh spring rolls which you make yourself from a deep fried elephant-eared fish. Pretty tasty but not worth the amount of effort (exactly what gramps used to say about prawns). They did look good though.

Our last port of call that day was supposed to be (with Guide no.4 – sorry missed one when we went for lunch) a trip to a crocodile farm. We weren’t all that excited to go but when Quatro announced that some crocodiles had escaped and he wasn’t sure if we were allowed to go we all had a good old chuckle. This is that fabled Vietnamese sense of humour again we thought. We were wrong, some 50 crocodiles had actually escaped so we couldn’t go. Not only that the police had closed off all roads anywhere near the farm so we had to take a two hour detour to get to our floating hotel.

Hot, bothered and tired we finally made it to a horror show of a place to stay. Given the bed was clearly designed to fit people from the 7th century it was a little tight for us with my feet, ankles and shins dangling over the end. It was like being back at university and sharing a single bed all over again. Oh, but accompanied by the whine of mosquitos and the slosh of the plumbing system which just seemed to deposit everything underneath our room. The mosquito net also had more holes than Fulham’s defence. Mmmhmmm that was a good night sleep.

In the morning we watched the sun rise over the Mekong which was a great experience as we tucked into some light, fluffy bread (the French definitely taught these people how to bake bread). Then it was off to a fish farm with Guide 5/6(?)where, in the words of Jen, “we were splashed by some big smelly fish” as they fed them for us. A quick detour to another island where we were left to wander through the village.

This always feels like a weird experience when you walk through a community as though they are a tourist attraction. Others in the group were taking photos as people ate their breakfast or walked their kids to school. It all felt very voyeuristic as these people hadn’t asked to receive tourists but had to put up with everyone walking through their village, pointing and in some cases laughing. Didn’t enjoy this part of the trip at all. 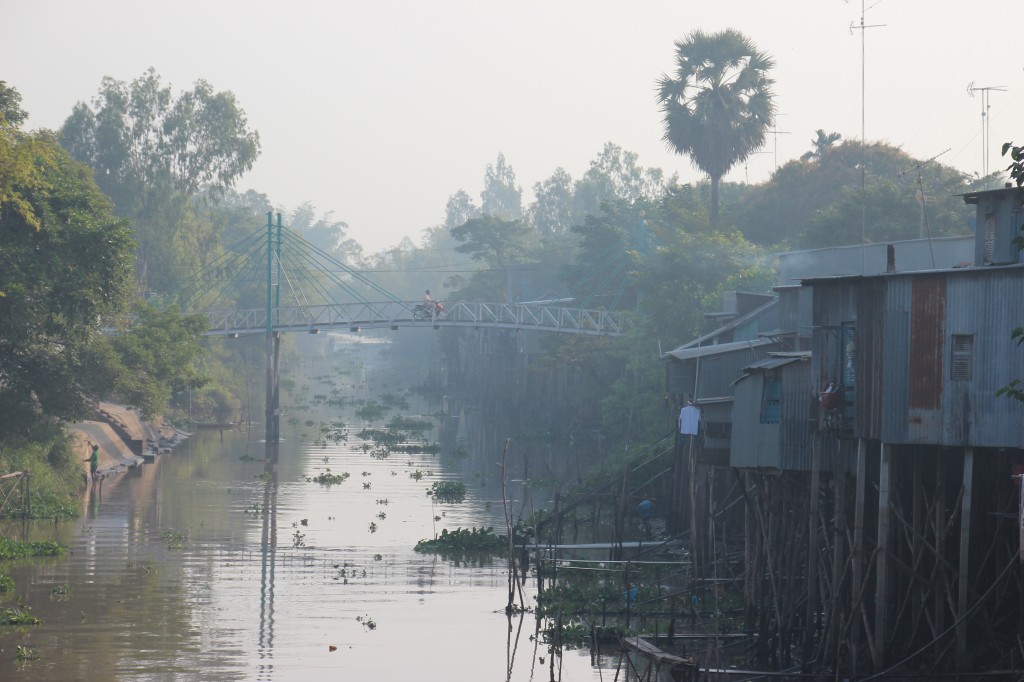 We were then put on our boat and met guide number I don’t know what who would help us cross the border. We reached the border after a jolly jaunt down the river and then waited for our visas to be sorted for the cost of $20 plus another $5 to grease the wheels. We were also told that in fact we would be taking a bus into town unless we wanted to pay an additional $3 for the promised boat.

After about two hours of waiting and us umming and ahhing over boat or bus and everyone else complaining about this or that (this and that included a ripped bag thanks to an overly excited bus driver, that being promises not being kept – these were plentiful, how late everything was running, how many guides we had “enjoyed” etc) we were shepherded onto the boat without paying. This seemed like a winner until about an hour in the boat stopped. A quick jump out by one of the crew and a fishing net was removed from the propeller and we were off again.

About one hour further up the river there was a very strange sound coming from the engine, then a lot of smoke and then some worried looks. Yes the engine was dead. We drifted to the bank, tied up and moved all our bags off the boat.

We were going to go by bus after all it seemed. Shame. But no! Another boat is on the horizon, perhaps these people aren’t useless after all, they have back up. The boat moored up, we all smiled; a mixture of relief and surprise. The captain shook his head, we were confused, they tied the broken boat to the working boat. Working boat chugged away with broken boat leaving 20 paying customers standing on a river bank.

At this point we all just had a good old laugh and a roll of the eyes, well those who weren’t 19 years old and terribly, terribly upset by it all. We picked up our bags and walked to the road to wait for some minibuses which guide no. 11(?) had set off to commandeer. Waiting by the side of the road was one of the better experiences as kids were playing, showing off for the tourists and generally having a good time. The locals were full of smiles and not trying to sell us anything. We were definitely not in Vietnam anymore!

After about  45 minutes by the roadside we were picked up and driven in to Pnomh Penh. Set down by their offices, there wasn’t a single apology from their team to any member of our group. There were some extremely angry customers amongst our group and with good reason in many cases. We just thought screw it and went to check in and have a good feed.

All in all it was a bit of a nightmare but if this tour is the worst experience we have then we will have escaped lightly. We were just trying to avoid sitting on the bus for too long and we did get to experience about of the Mekong River lifestyle. It was very easy to imagine life here 50, 100, 300 years ago. Probably less motorbikes I am guessing! The slow pace of life that mirrors the slowly moving Mekong definitely needs to be experienced at a much more sedate pace.