The ridiculously fast (and punctual) Shinsanken trains that run throughout Japan allowed us to cover quite a lot of ground and also take some pretty cool day trips around Osaka. We had planned to visit Himeji Castle but it was under renovation inside a huge temporary structure so would have been pretty rubbish to visit. Instead we just went to Kobe twice having enjoyed the beef so much the first time!

This place was rated number 1 on Trip Advisor for Kobe so we thought we should do it properly and booked ourselves in for lunch. A quick lurch on the shinkansen and we were there, already salivating after our beef experience the night before in Osaka.

Jen didn’t want to be late so we arrived about an hour early and walked around to build up our appetite. We were sat down at our table which was around a teppanyaki style hot plate where our chef would be performing for us. We swiftly ordered a nice bottle of red and made our meaty choices, Kobe Premium sirloin for me and Kobe premium tenderloin for Jen. The requested meat was brought out and introduced to us. They made a lovely couple.

First up was some beef sashimi which slipped down very easily and had us craving the main attraction which was hovering above the hot plate on a wooden board.

The beef was gently placed on a cooler part of the hot plate and trimmed into smaller pieces with the large cuts of fat left on the hot plate to provide the lubrication for cooking. Then the remaining meat was cut into small chunks with one or two left to cook in the fat whilst the others bided their time. Lightly seared on each side the chef asked how we would like our meat cooked. Two quick responses of rare elicited a broad smile from old man river.

When Rojin was satisfied that each piece was cooked just right they were delivered onto our plate like offerings to the gods. We ate each small piece slowly dunking it in soy sauce mixed with whole grain mustard and a sour sauce that was delicious. A little salt and pepper on the chopsticks was just the right seasoning as we devoured every succulent mouthful.

After our first taste of the beef our wonderful old chef man started to dice up the vegetables and fry them in the lovely meat fat. Lotus root, carrot, aubergine, tofu and some mange tout were cooked beautifully with the aubergine tasting more like beef than a vegetable – definitely a good thing. The quality of the fat meant that nothing burnt and everything tasted sublime.

Slowly the chef cooked each piece with loving attention and we ate each piece falling further and further in love with this delicious meat cursing the fact that we would soon be finished. Sadly that moment came and we were left to sup our 2010 Margaux and watch as our chef performed the same ritual for other diners at our table.

Our personal chef cut our beef into small pieces and cooked them in the rendered fat from the pieces of meat until perfect as we tucked in ravenously. It was absolutely delicious and a real shame when it was finished. Vegetables were also eaten. They were good.

As a final word on the meal, the quality of the meat and the fat was so good that our chef suggested we should rub the fat into our skin as it would be good for us. We declined.

One of our other day trips was out to Nara where there is a huge Buddha and the world’s largest free standing wooden building. The wooden temple unsurprisingly given Japan’s history has burnt down several times and this latest reincarnation is only two thirds the size of the previous one. It is still vast and the Buddha is equally massive. There were loads of deer running around and all in all it was a great day trip out from Osaka on our last day before flying out to Hong Kong.

Kobe for a 2nd time:

We decided to head back to Kobe and go up the big cable car they have to the top of the hill overlooking the city where there is very strange herb garden type place with an attempt at a traditional old Englsh house and garden. As were there in approaching autumn it was perhaps less colourful than it could have been but it was still a very nice walk down.

We then went and had another lovely lunch at Garaku and watched abalone cooked for the first time. Watching them squirm about before they were put on the heat was very weird but couldn’t ut us off our delicious Kobe beef!

We then wandered around the old colonial buildings and into Ben’s house which is just an old house of a chap called Ben. He was a hunter though and inside there ae loads of stuffed animals including giant eagles, a huge polar bear and a couple of terrifying tigers.

Before signing off from Japan it would be remiss of us not to mention the toilets. They are awesome. Sound effects, deoderisers, bidets, heated seats they had them all. Splendid.

And that ladies and gentlemen, boys and girls was our time in Japan.

P.S. Here are some octopus (octopi/octopussies?) on sticks: 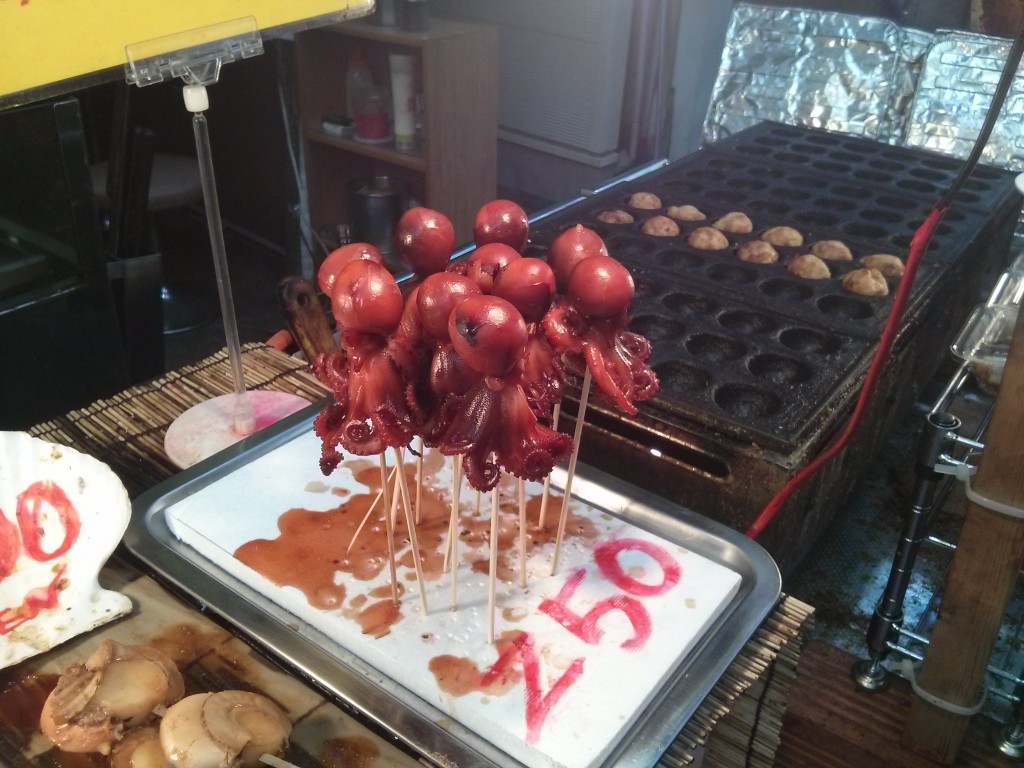