When I first met Nick it was rather obvious (from the way he used to bang on about it all the time) that he was still in the throes of a bit of a love affair with Australia – and more specifically Airlie Beach and the Whitsunday Islands; an area in which he spend a good three months of his carefree / wild / unencumbered / innocent / hedonistic (not completely, he was working you know) nineteenth year.

So it was understandably more than a mild degree of curiosity that I felt when the Greyhound Coach (after a 6.5 hour journey from Townsville) finally pulled into the carpark of Port Airlie. And that’s when the exclamations started:  “Well this is NEW. THIS wasn’t here ten years go. BLOODY HELL this DEFINITELY wasn’t here BEFORE.” It seems that Airlie Beach has changed a little bit in the last decade.

Luckily some of the past charms of the place have been preserved, namely:

A rather fine evening was had during which Nick showed me round the delights of Airlie and an excellent tour guide he was too, complete with anecdotal reminiscences and only the odd shake of his head whilst muttering “things have changed….”. Not only did I get to try Vodka Squash:

(very refreshing) I also sampled classic Aussie fare in the form of a Croc and Roo grill (I’d recommend the Croc over the Roo).  All in all a very enjoyable time was had, made all the better for knowing that the best was yet to come…

In the morning we set off for the experience that really makes Airlie Beach the backpacker haven that it is: The Whitsunday Islands. These are the islands that in years gone by Nick travelled round whilst working on sailboat trips from the marina in Airlie: exactly what we’d come for.

Luckily ours was actually nothing like the boat trips that Nick used to work on – there was by all accounts less puking, partying and pulling going on over our 3 night boat trip – but nonetheless it was a more than memorable experience, and I now see how Nick was completely justified in gabbling on about the place so much over the last nine years.

We were on ‘The Getaway’, skippered by an Aussie called Trent who was devastated to discover that for the first time ever, his 31 years made him the oldest person on the boat; and hosted by the lovely Ash who kept us in endless supply of food and who very weirdly did a degree in joint Art History and Economics at the University of Queensland! She’s like Nick and I rolled into one!! (except she’s not, she’s a 24 year old blonde Aussie who has the immense pleasure of living in Airlie Beach). The boat held 8 passengers altogether; three other couples of around our age from Sweden, Switzerland and Italy. A great bunch of people.

During the trip we took a tour round part of the Whitsunday archipelago, stopping at various stops to snorkel and swim from the boat.

Unfortunately big tides were afoot (something to do with the moon) which made visibility less than great, but at one snorkelling spot we had the great privilege of snorkelling with a host of giant turtles – maybe 5 or 6 altogether.  Once I’d got over my fear of kicking or doing one damage with my flippers it was amazing to float alongside or above such graceful creatures. One even slowly swam up to the surface with us, popping his head up above the water for a breather just at the same time as we peeked up at him. Other highlights from the snorkelling included Nick seeing a rather big reef shark, and also seeing clownfish (aka Nemo fish) for the first time.

As well as snorkelling we were able to get in some good beach time; a favourite being the spit of sand at Langford Island (yes Sally, Langford!) as well as Whitehaven beach that we were able to see at high tide, and then return to later. 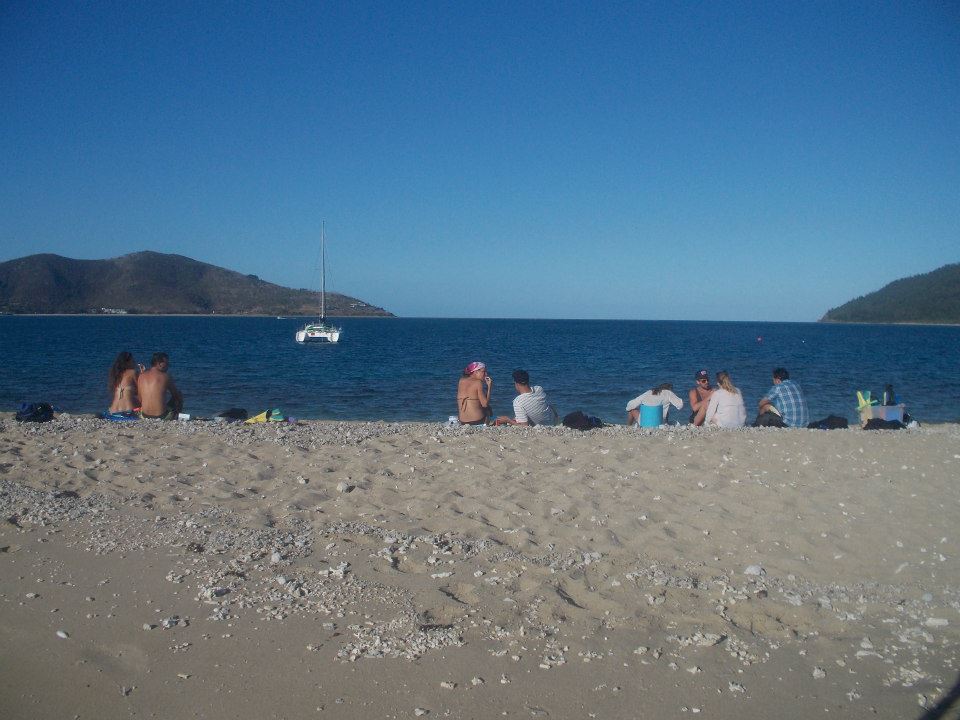 The strong wind meant that we weren’t able to be dropped at the viewing spot to take in the famous view of Whitehaven at low tide (google it!) but we were able to enjoy an hour or so sitting on the pure sand with nobody else around. Not a soul.

One of, I think, the best parts of the whole trip was not only the view of the islands as we sailed around them during the day (which were undoubtedly stunning) but also the panorama of stars that we were privy to at night. Lying back on the trampoline of the catamaran (strictly no jumping) feeling its gentle rocking, and hearing the odd splash of something big jumping out of the sea nearby, was pure meditation in itself. This was of course broken every few minutes by group cheers every time a shooting star rocketed past – and this seemed to happen with amazing frequency. To see the sky seemingly so close, a view only broken by the tall, black line of the boat’s mast swaying many metres above our heads, was definitely one of the biggest highlights for me. 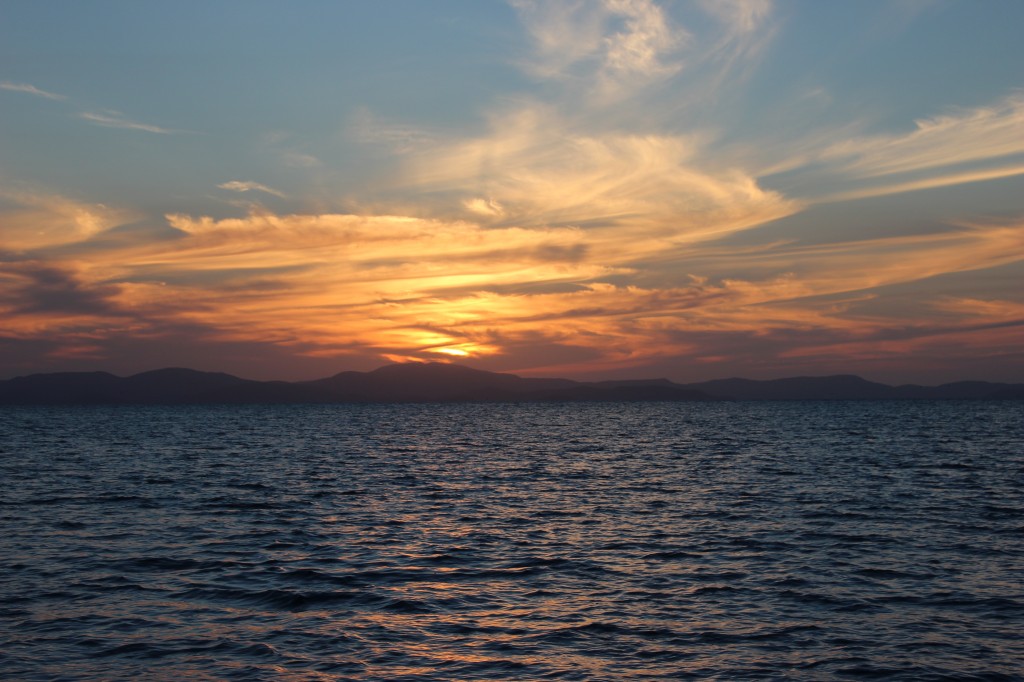 I can definitely understand why Nick waxed lyrical about the Whitsundays for all those years; now it’s going to be my turn to bang on about them for a while. 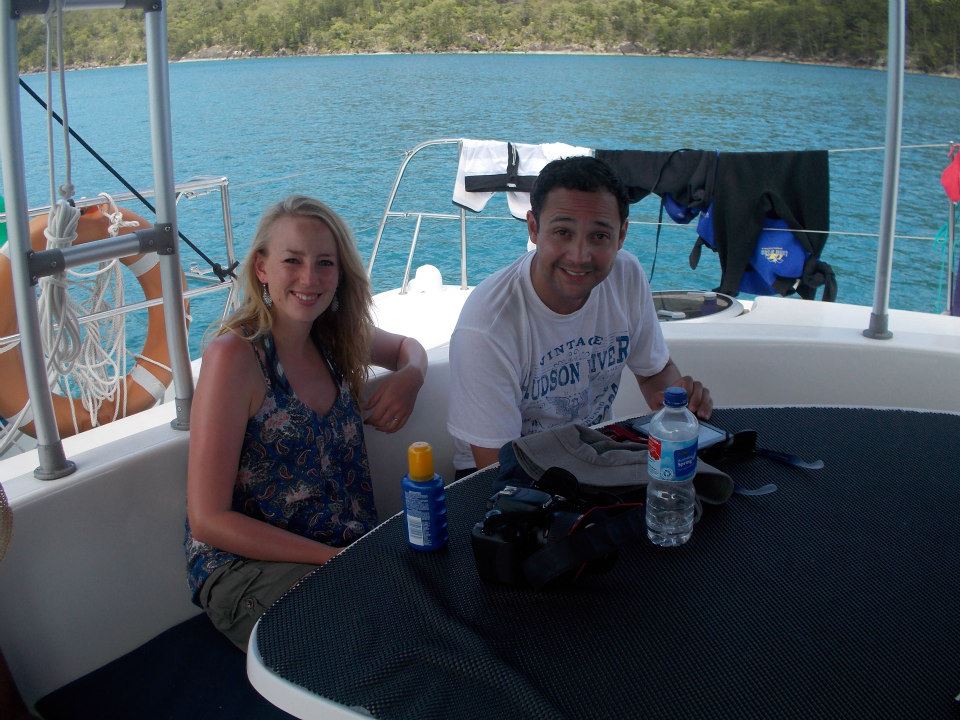