About the only time free we have in Japan seems to be whilst sitting on the SHinkansen trains so once again that’s where this blog is being written. This time on the train from Kyoto (via Shin-Osaka) to Hiroshima.

It’s the 3rd October and we have spent 6 days in this amazing country and it is hard to believe just how much we managed to fit in whilst really enjoying ourselves and barely arguing at all despite the fact I have now been six days without a smoke.

A whirlwhind two and a half days after arriving on our 36 hour trip was a great way to banish jetlag and really get to grips with the city. After landing we dumped our bags at the hotel and as we couldn’t check in til two went for an explore. We discovered Tokyo Midtown and Rappongi Crossing/Hills on our door step. Midtown is a sort of underground mall/maze which seems to stretch forever whilst Rappongi Hills is a skyscraper laden mall/maze creation with an enormous 50 odd storey building at the heart of it.

Midtown was a truly crazy world of proper high end shops, amazing food courts, and then some pretty cheap and cheerful ramen noodle shops and proper local sushi joints where we had our lunch. We also watched a few hundred yogaists doing their thing on this massive park outside Tokyo Midtown.

After some pretty excellent sushi (Jen ate the sea urchin but I cried off) we wandered back to check in and have a quick nap. Unfortunately my alarm didn’t wake us sufficiently and we ended up sleeping through til about 7pm instead of 4pm.

A refreshing shower later we were back pounding those streets in search of dinner. We found it at a busy ramen place that seemed popular with a young Tokyo crowd. The food was pretty delicious but we were left feeling wide awake at 10pm so found an English pub which was showing the 2nd half of the Spurs Chelsea game. The pub was like being back in the early 2000s as you could smoke in the pub and most of the western men seemed to have been slightly lost in time as well. A truly magical place though!

The next day was to be a walking marathon as we checked out some more traditional Japanese sights including: 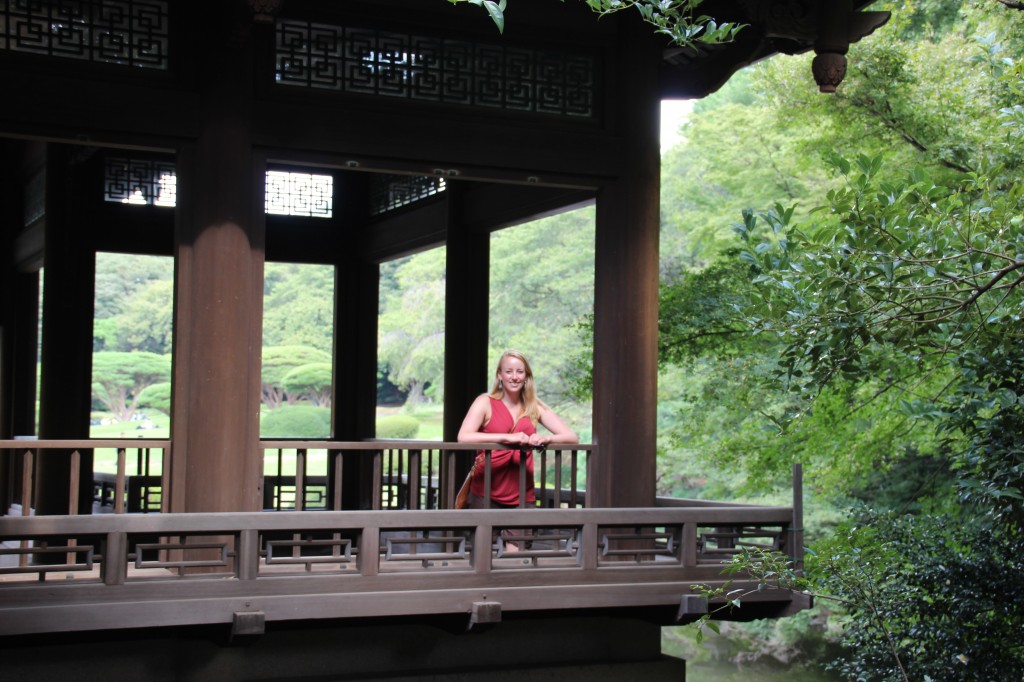 Muji Shrine – this old shrine in another park was probably most notable for a wall of sake barrels given as offerings every year by the best sake producers in all the land. Mouthwatering stuff.

Shibuya Crossing – we then went to Tokyo’s answer to the Oxford Street crossing/Times Square where the young and hip of Tokyo go to shop and hang out. We saw some amazing sights both with the clothes the kids were wearin, a big anti-nuclear bomb procession and some crazy shops.

Rappongi Hills – we checked out the massive spider statue by Louise Bourgeois and got lost for a little bit before saying enough is enough and heading back to our hotel with very aching feet.

We ate a cracking dinner in Midtown that night with two courses, glass of wine and a beer and a jar of pretty decent sake for less than you would pay in London for a steak and a beer at any average pub. We did head drunkenly to the 24h delicatessen and buy eclairs and a cracking bottle of sake afterwards which should probably be attached to the cost of the meal!

The next day we made our way to the Sensoji Temple which is one of the most visited in Japan and although it was pretty massive it was very new (due to rebuilding etc) and lacked a bit of something with so many people crowding around it.

On the long walk up to it though you pass between all these tiny market stalls selling all sorts of Japenesey stuff. We managed to buy some chopsticks and these little cake things they were cooking whilst we watched which were flying off the shelves. Perhaps they grown on you. It was a good little trip first thing before we head to….

Probably best if this is in a second blog post as that first one was pretty long!

P.S. the beard has gone: