After the railroad to Mandalay we turned our attention to another boat ride to make our way to Bagan and the land of stupas and Payas. This one would prove to be a great decision as we slowly drifted down the Irrawaddy in a ferry which may not have been a paddlesteamer but had about the same power and speed. It felt like a good day trip rather than a ferry from M to B.

We watched the sun rise at speed over the plains of Mandalay before drifting down past fishermen and their boats with temples, stupas and payas littering the river banks. The journey seemed timeless with few if any signs of the 21st century. The boat chugged, the river meandered and the scenery drifted by in a dusty haze as we read up on what to do in Bagan. 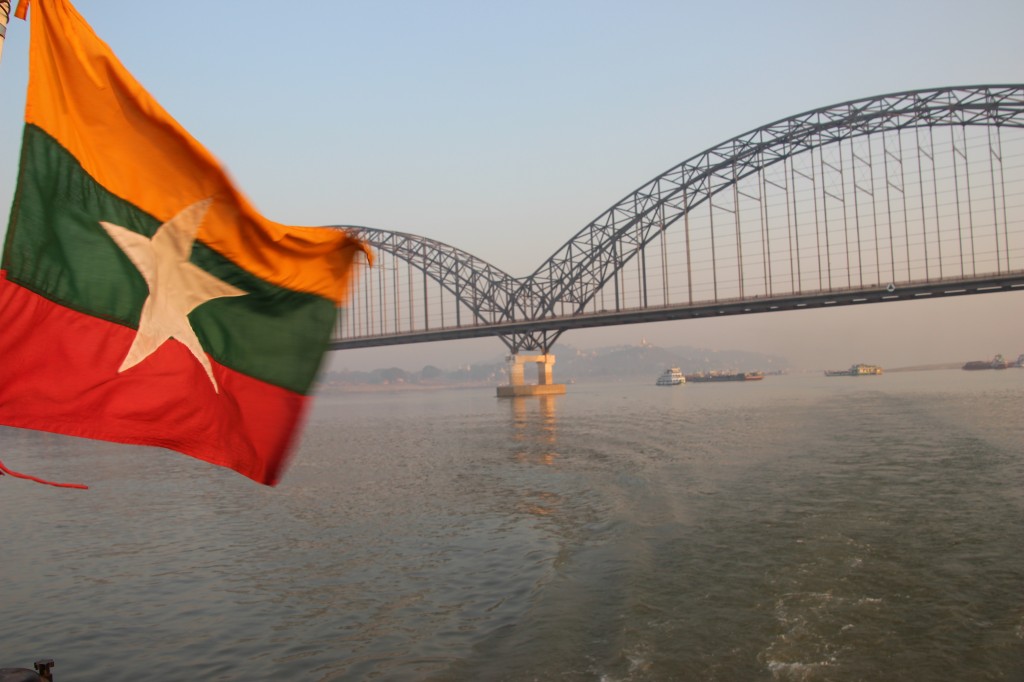 Back in Vietnam for Jen’s birthday I had promised that we would take in a sunrise ballooning trip as part of our time in Bagan so the first thing we did on arrival was to book our Foggian adventure. The old company who have been in Bagan for years were fully booked up but their new (2 months old) rival, Oriental Ballooning, had two places left for the next morning so we snapped them up!

In our planning we had decided on the first day we would try and see as much as possible using a taxi for the day which we would then follow with the balloon and finally we would pick off a few quiet temples by bike for some exercise. A good plan it was, however, a variation of Montezuma’s revenge had struck my belly so we were reduced to the taxi and balloon.

It turned out rather well for our picture taking fingers as there would have been some serious danger of repetitive stress syndrome as the temples were so beautiful. We are in the heart of the dry season with no rain experienced in Bagan since the end of October (I know, UK, I know) which means there is a beautiful red dust that is kicked up by every bike, horse cart, taxi and tour bus. Early in the morning and in the late afternoon the light bathes the temples in a golden glow and as you look out over the vast savannah-like plains dotted by stupas you repeatedly catch your breath. 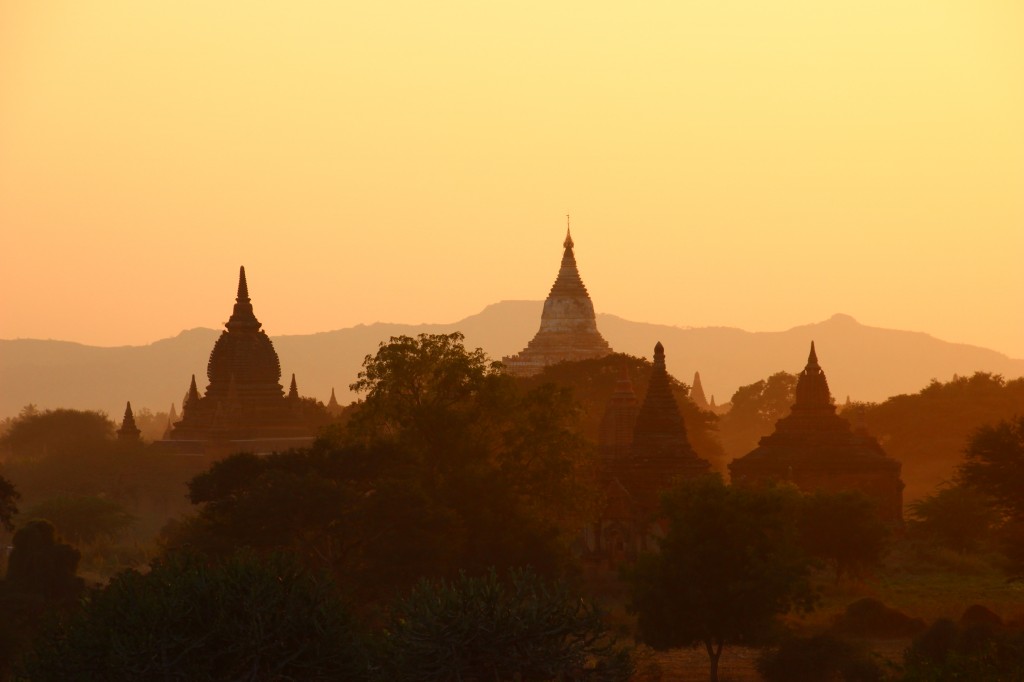 There are literally thousands of temples in Bagan and in the surrounding area and any time you climb up one you can start to imagine what the place was like before Kublai Khan’s Mongol hordes descended and laid waste to the city. There is some debate as to whether the Mongols ever had to fight to take the city or whether the ruling king had already fled in panic. Whichever way it would have been some sight to see the horsebacked Mongols riding through the red dust and temples.

In 2014 though, with no Mongols in sight we contented ourselves with imagining the scene before destruction and imagining how long it would take and how many men would be required to build the thousands of temples. We visited big temples, small temples, gold ones, white ones, brick ones, ruined ones and active ones. Jen bought post cards from every small child who all thought it was quite funny that she had unwittingly dressed up as a school girl in her green trousers and white shirt.

This brought many chuckles as we walked through the market in nearby Nyaung-U especially when it came to Jen buying some new trousers and a silk top. It also led to about 300 people trying to sell me stuff as I stood and watched and waited for the inevitable negotiation. It was a beautiful market with flowers everywhere, fruit speckled with flies and the familiar smell of dried fish and pickled everything. We arrived before the swarms of tour buses and were able to enjoy the locals actually doing business with each other rather than targeting the tourists.

The next morning was ballooning with the good folks at Oriental Ballooning. We were picked up at daft o’clock in a bouncy 4×4 before driving to another pick-up at the most expensive hotel in the region. This hotel has its own modern tower built in watchtower style from which you have an incredible view over the temples but which obviously looks ridiculous to the rest of us. It was built by the brother of a seriously high up army official – exactly. We collected two Mckinsey Consultants from Singapore and headed to the take-off site.

Met by very British accents and with a strong cup of tea inside us we were instantly more relaxed although I was still clenching everything. We had a quick safety demonstration and chat before they started to inflate the balloons! As they slowly filled with air and gas, expanding into giant green balloon shapes there were some anxious glances as we realised it was happening.

Suddenly we were jumping in and assuming the landing position (it was also the take-off position) and we were up, in the air, floating and on our feet watching the neighbouring temple slowly getting closer and bigger and then smaller and further away as we looked East to the rising sun peeking over the distant mountain range. It was truly breathtaking and an experience we will never forget.

We first flew up high to travel South and take in the vast view before lowering in height to travel North again. Brushing past the temples and waving at kids and farmers it felt almost surreal to be slowly gliding over this amazing landscape and being able to take it all in. The peaceful serenity broken only by the loud blast of the burners to stop us descending too rapidly.

After what seemed like hours we were on our way down and our pilot Piers navigated us into a small field and we assumed the position once more. Landing with a small bump we were down and safe on terra firma. Jen for once looked disappointed to have landed and not still be up in the skies. We drank a small toast of sparkling wine and received our certificates before jumping back on the 4×4 and arriving safely back at our hotel just in time for breakfast.

The next few days were unfortunately spent with me lying in bed not wanting to move much so we had the time to write blogs, edit some photos and just generally catch up with admin and plan ahead. One of these plans will be apparent very soon with an upcoming blog and special announcement.

So stay tuned and don’t worry Jen will be back with the next blog from Inle Lake.

P.S. JEN IS NOT PREGNANT!