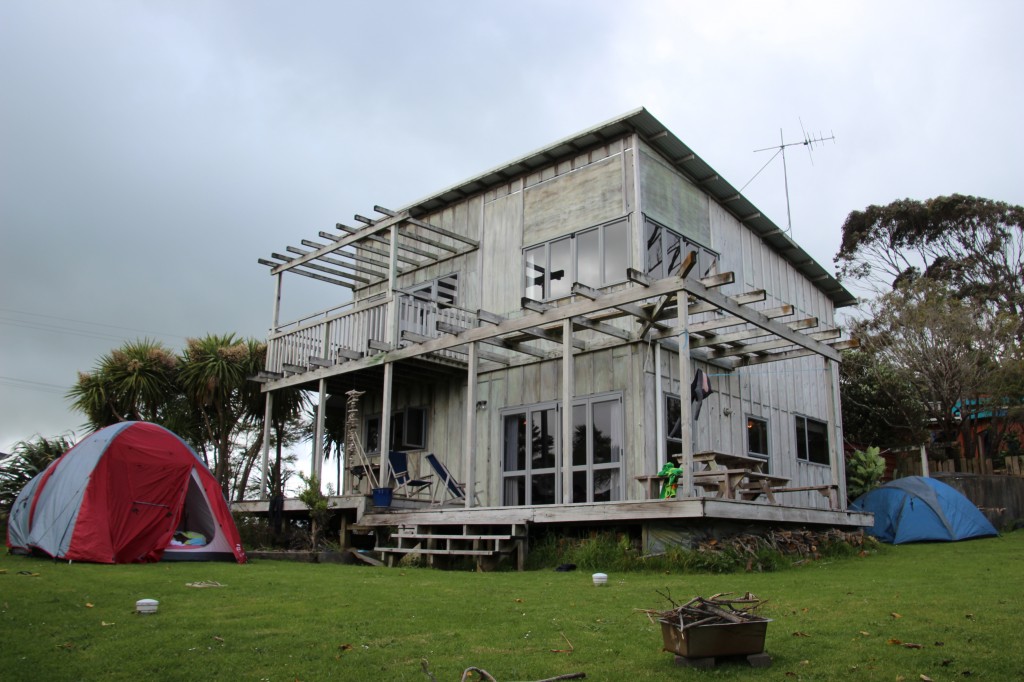 It’s like being at home but even better! Our first weekend in New Zealand was Labour Day Weekend which meant a long weekend for the workers and a long weekend for us too down in Raglan at Uncle Neil and Auntie Paula’s bach (pronounced batch – me neither). With Dad and Emilia popping over from Sydney and all the cousins and their other halves it was a good group heading down to the beach. 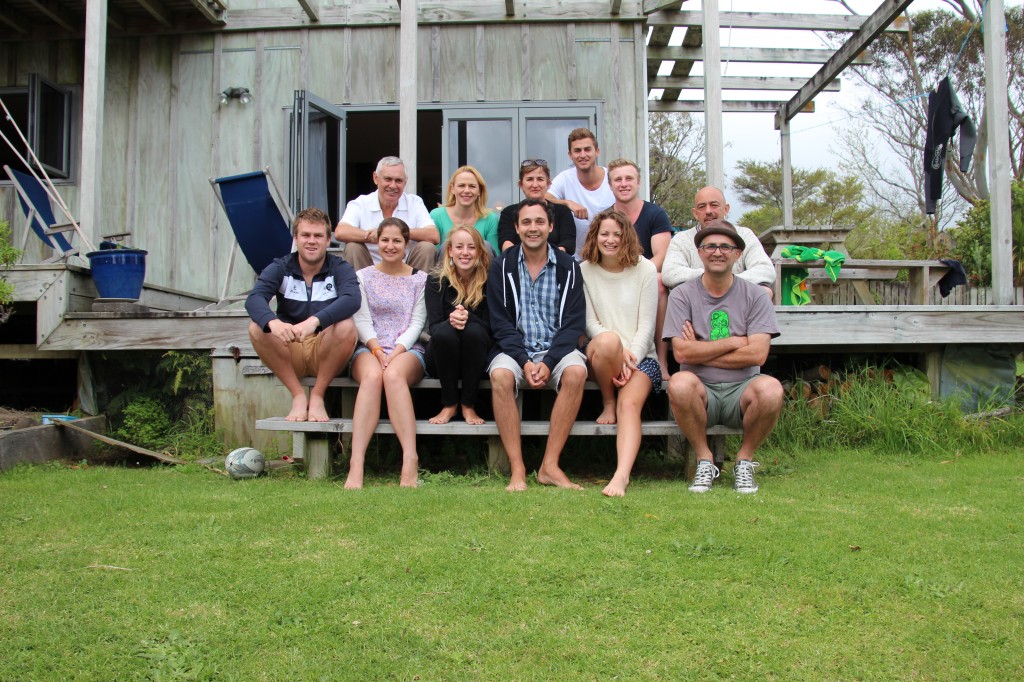 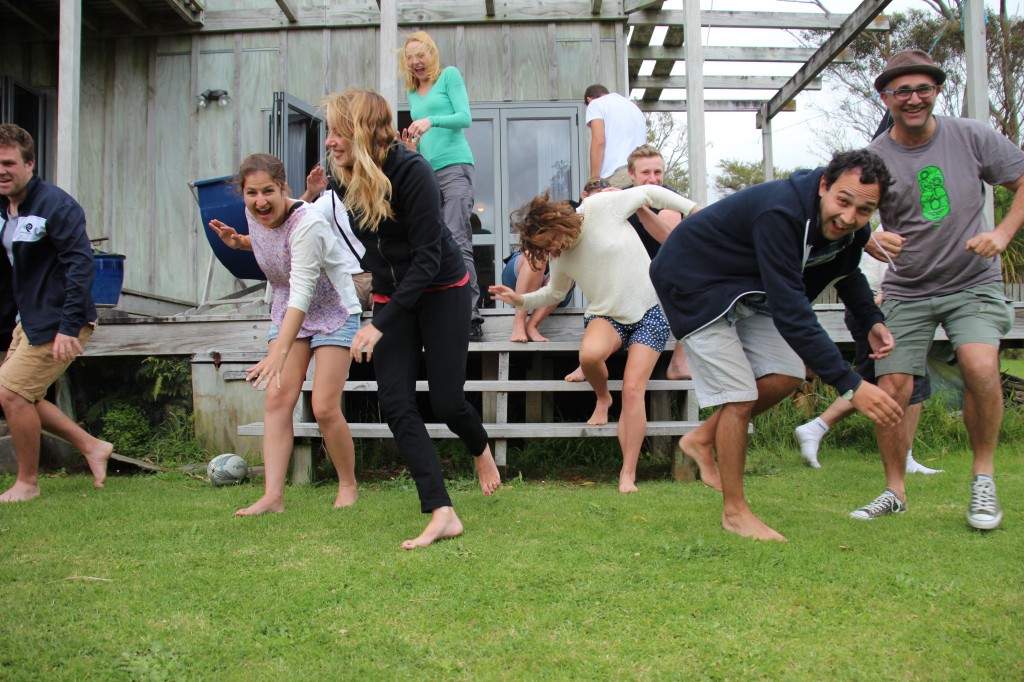 Whilst most of us took the car Joe, Dad and Emilia flew down in Peej’s plane with Joe taking the stick for much of the way. I’m pretty sure we heard that he was flying a few times during the course of the weekend. Given the amount of stick he had taken the previous evening for his hair, clothes etc it was about time he was in control!

Jen and I jumped in Annie’s car with her boyfriend Hamish and we road tripped our way down. After Raglan we are taking the car around New Zealand so some of the trip down was spent discussing the various nuances to the car. (Note to Annie: one week in and all is good – touch wood)

Once we all met up at the designated meeting spot of the pub we headed for lunch at the bach followed by golf: a 7-ball around nine holes as we to varying degrees, hacked, smashed and stroked the ball between trees, fairways, rough and sheep. It was beautiful – when you weren’t stepping in sheep shit (it’s just grass honest). After a debrief at the pub which lasted into the early evening we headed back for dinner and several bottles of wine, beer and rum were destroyed as party tricks came to the fore.

We had a lovely trip to meet Minnie the pig with our leftovers (this is a little out of whack but we wanted to put the photos in!): 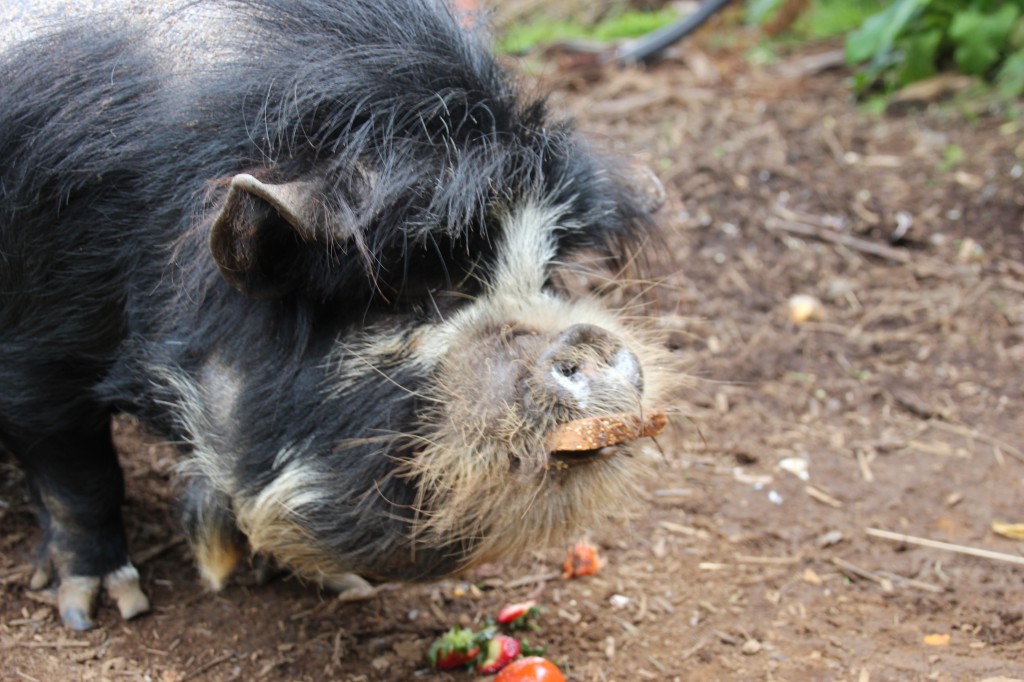 Whilst Jen’s ability to pass her arms over and around her body without separating her hands was probably the winner there should be a special mention for Paula’s head stand which whilst it may not have won too many marks for its artistic merits had everyone blown away by its force. There are more photos available on request but unfortunately no video with sound.

Despite every excuse needed we all woke up early on the Sunday and we took a quick trip to a beautiful look out point and then onwards to check out one of the best left hand breaks in the world. Annie and Joe had surfed the day before and the swell wasn’t great so a pass was agreed. 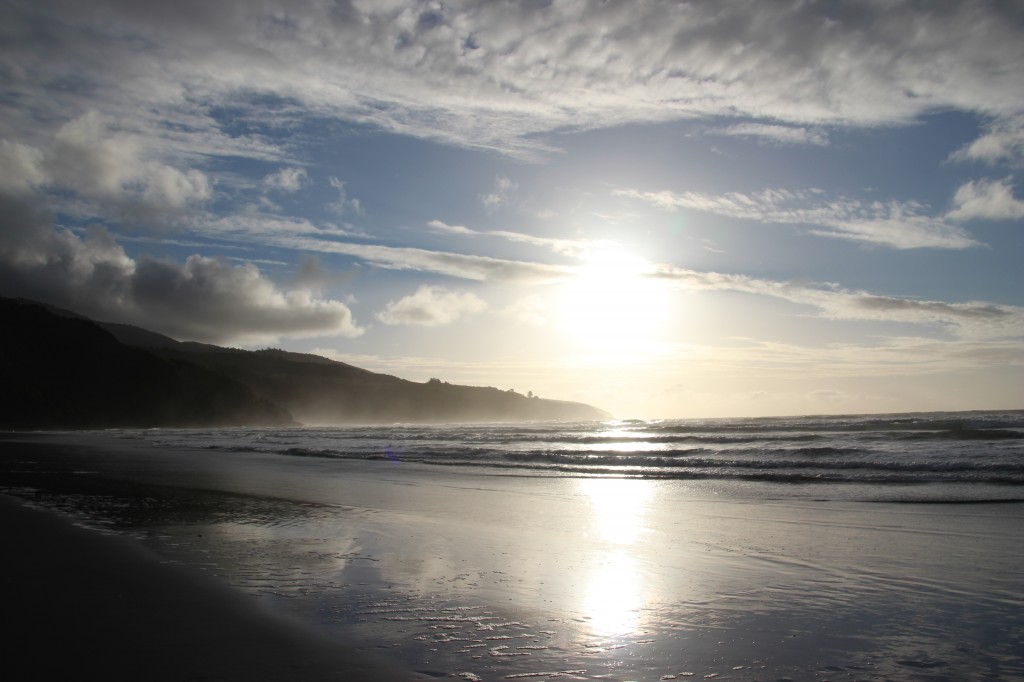 There was also a good session of mucking about with a couple of rugby balls as we attempted to pass two around in a circle. Each person on receiving the first ball had to throw it in the air and receive the second ball and pass it on before catching the first ball that is in the air and passing it on to the next person. It was even harder to do than to describe. 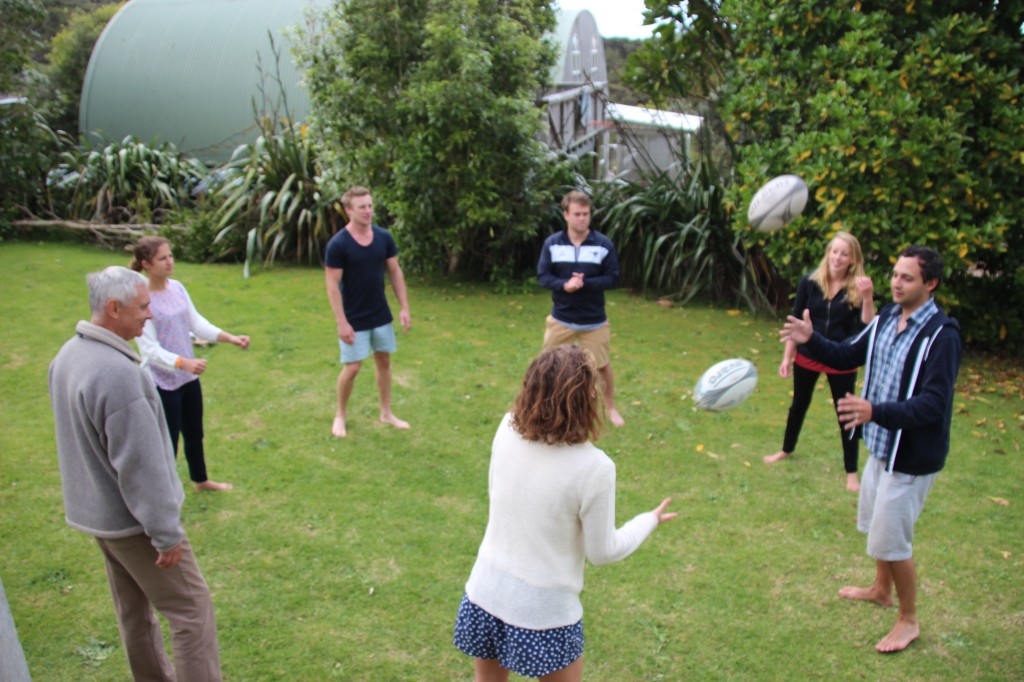 Buoyed by our success we headed down to the beach for a quick session of four on four touch rugby. There were some exquisite passing moves with dummies being bought and sold faster and easier than at any Hong Kong market. The only real winner was the game as we all came off nursing various injuries with the exception of the indomitable Ella and Robbie. 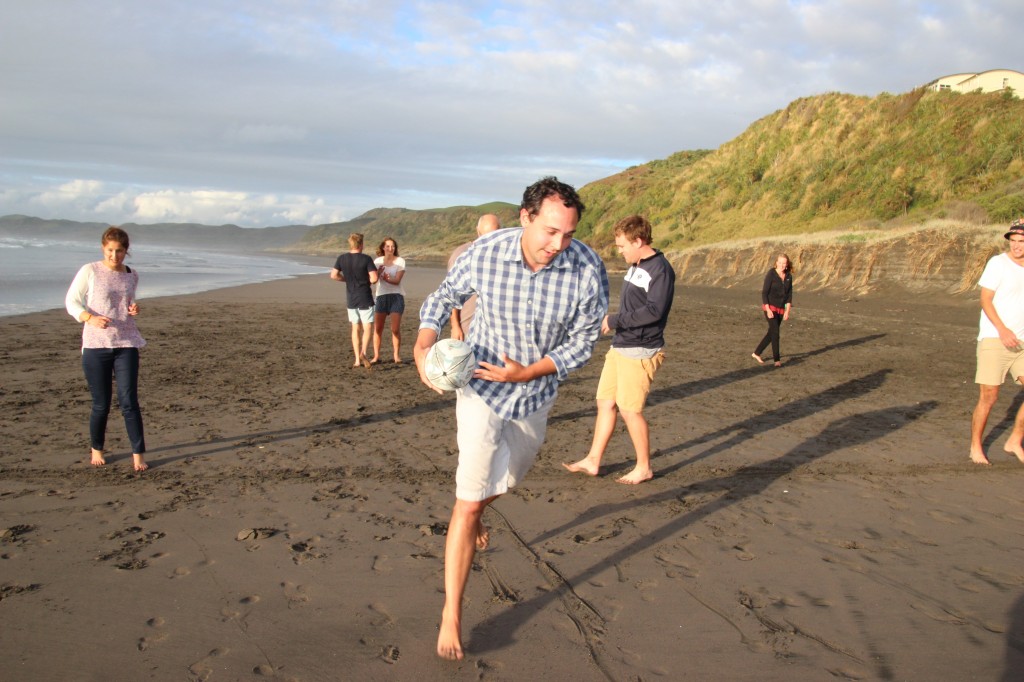 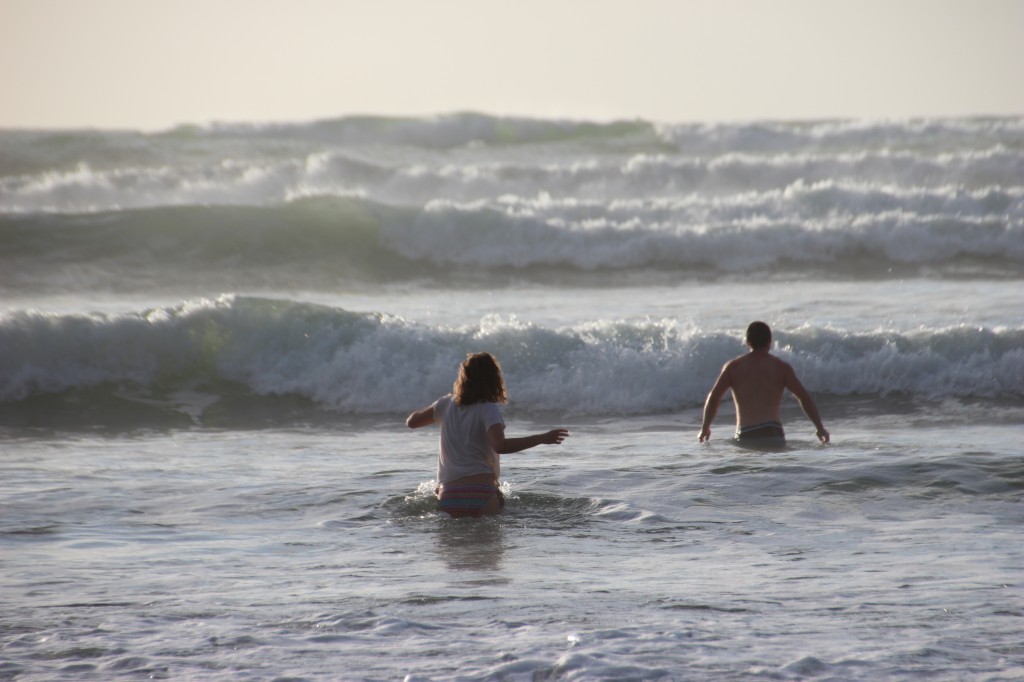 After the previous evening’s excess we throttled back to a few bottles of wine and beer and no rum on Sunday evening and were rewarded with a less hungover start to Monday morning. Our fush dinner was exceptional with a delightful pasta salad whipped up by Ella and Annie. Joe’s hot smoked salmon hors d’oeuvres were once again out of this world and a definite step up from opening a packet of crisps. When it comes to HDO’s he definitely doesn’t mess about.

With the offer of nine holes of golf I was off like a shot to hit the course again with Neil as we hurried around nine holes in just about an hour with the course to ourselves. The golf was tidy and my dad better get down the range as Neil’s game is hotting up.

After lunch we had to bid farewell to Neil and Paula, Joe, Annie, Ella, Hamish and Robbie and it was a fond but sad farewell having been made to feel so welcome. It was great to see my cousins altogether for the first time in a long ,long while and to see how well they are doing.

We want to say a huge thank you to all of you guys for such a wonderful weekend that recharged the batteries and set us up wonderfully for visiting the rest of what promises to be a wonderful country.

Stay safe, be sensible, have fun.

[Jenny: Spending time with friends and family has made us realise, even more so this month, the importance of those close to us and we’ve been thinking a lot about those back home. In particular, one of our closest friends is at the moment going through an especially horrible time and we both want you to know that you are very much in our thoughts, all of the time. We are thinking of you and sending you all of our love.]