Wow it has been a long time since we wrote anything on here so apologies for that. Or alternatively it has been a welcome break for you all. Hopefully this blog post will do justice to a fantastic last week in Japan where we took in the beautiful island of Miyajima before heading to Osaka. Unfortunately as we are writing this a long time after the event we may have forgotten a few things along the way.

MIyajma is a short ferry ride away from Hiroshima and we decided to spend a couple of nights there to explore the area including a hike up the mountain. It turns out that the huge observation area up there was under renovation and closed which led to a bit of an anti-climax for our two hour hike. It was a beautiful trek up though and there were some great views along the way.

The main attraction of Miyajima is the huge “floating” torii that is the waterbound entrance to the ferry. We spent a lot of time trying to take good photos of it and experimenting with the camera during the day at dusk and at night. We finally used the tripod for the first time so I’m glad I have carried it around with me for the last six weeks. 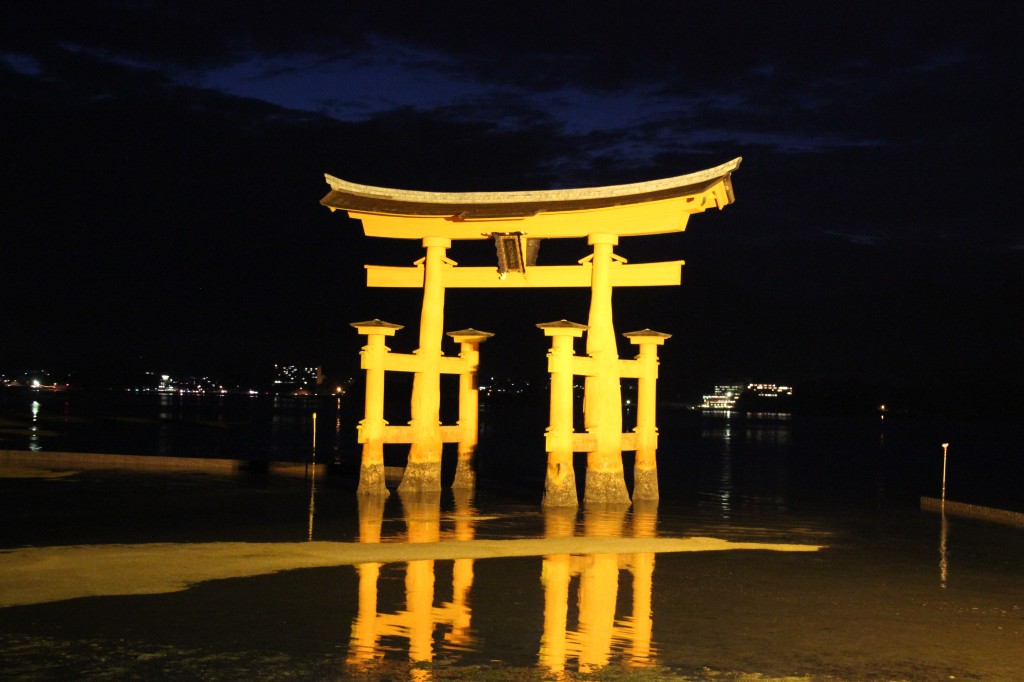 I also had my third and fourth okonomiyaki in Miyajima which were pretty delicious and better than the fifth I had when in Osaka. We started eating these in Hiroshima where they are a speciality dish. They are essentially fried noodles, very thinly cut belly pork and loads of cabbage sandwiched between a fried egg and a very thin pancake before being topped with a special sauce that is a mix between bbq and Worcestershire sauces. It is delicious and more often than not cooked directly in front of you and eaten off the hot plate.

After Miyajima we then headed to Osaka which was a cracking city filled with great food, lots of bars and plenty of stuff to do. We ate really well at a Matsusaka beef restaurant where you cook the beef yourself on a little bbq type thing. The meat was delicious and we cooked it very well – pretty much just showed it to the flames. We did have a particularly epic bar crawl one night where Jen met somebody who went to Bingley Grammar and another Yorkshireman who looked very Japanese but sounded like a true Leeds man. We followed a map given to us by a Frenchman who lives in Abu Dhabi but somehow this map knew plenty of good bars so thank you Mr Frenchman.

We also checked out the Castle which in traditional Japanese style has burned down many times and been rebuilt. It did feature heavily in a book I was reading at the time (Shogun by James Clavell) which was pretty cool.

Osaka allegedly has the world’s biggest aquarium so we had a little peak and saw some pretty big whale sharks. I’m not sure what will happen when they get really big as it might all get a bit tight in there with all the other sharks and rays and things. They had lots of tanks that showed us what we might see in Fiji, New Zealand and then on the barrier reef so that had us pretty excited.

We then used our time in Osaka to go on a few day trips near Osaka which will feature in the next blog post. Osaka is a pretty cool city and very different from Tokyo. People seem a lot more approachable whereas Tokyo everyone seemed like they had somewhere to be. That may be a little harsh as we weren’t in Tokyo very long so maybe we will have to come back for the Olympics in 2020.