We are tucked up in a lovely hostel in Foz de Iguassu after three incredible days in Rio De Janeiro. Over a few Brahmas last night we decided Rio is now one of our favourite cities with its incredible energy, stunning landscape and the changing shape of the city and the favelas.

On Tuesday we woke to the sight of a rain, mist and windswept Rio which immediately put an end to our hopes of the helicopter trip. Instead Jose (our driver kindly arranged by the awesome Tom Robinson and his company Dehouche) took us on a 6 hour tour of Rio that took in some incredible sights as we slowly learned the history of Brazil and Rio de Janeiro whilst travelling in what was basically a tank: 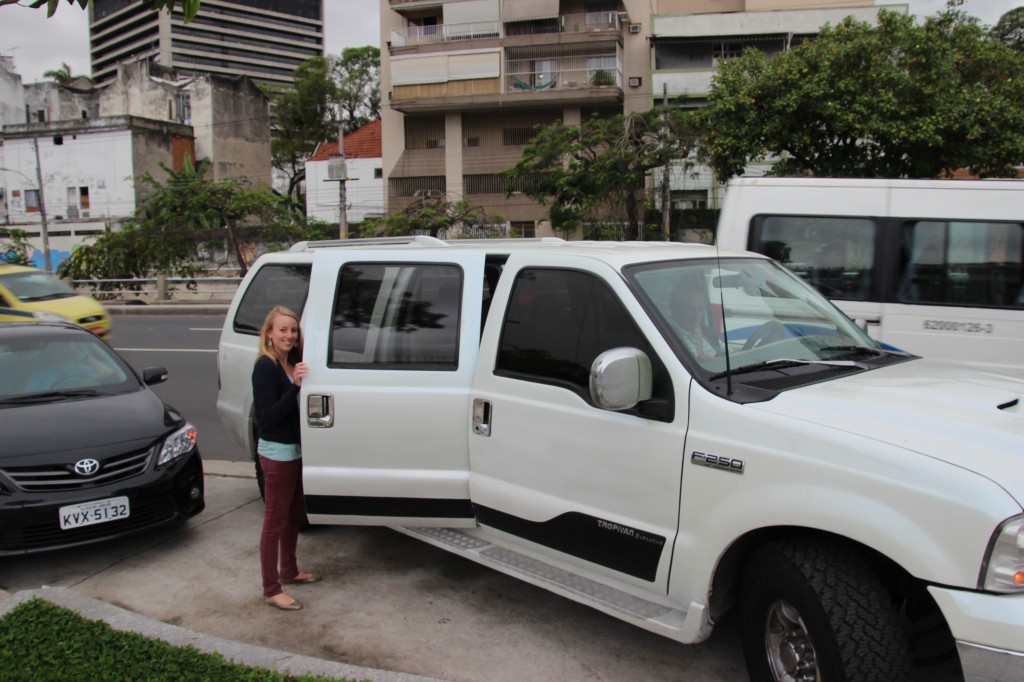 Listening to him talking with such passion about the city as we drove all around it helped bring the city to life rather than just a series of pretty building. Unfortunately that night we went out for our anniversary dinner and had a very nice bottle of Argentinian Malbec so I can’t remember many of the stories and you will have to just enjoy the pretty pictures from our tour:

One of our first stops was to the Benedictine Monastery (Mosteiro de Sao Bento) which truly had to be seen to be believed. A reflection of the gold rush this Monastery is hand carved wood layered with gold leaf and the result is spectacular: 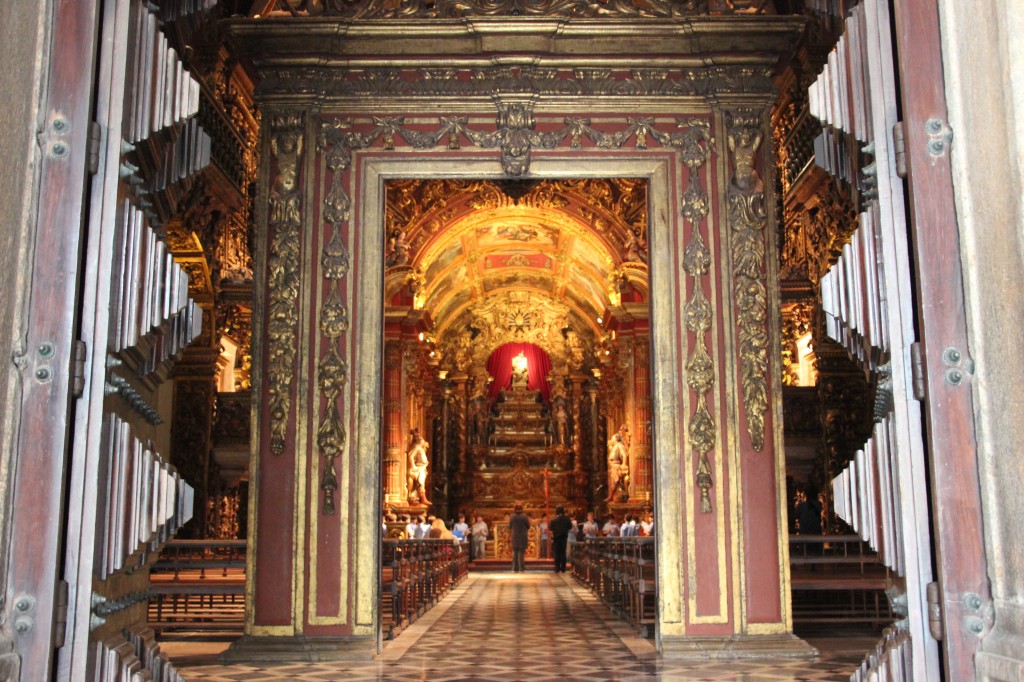 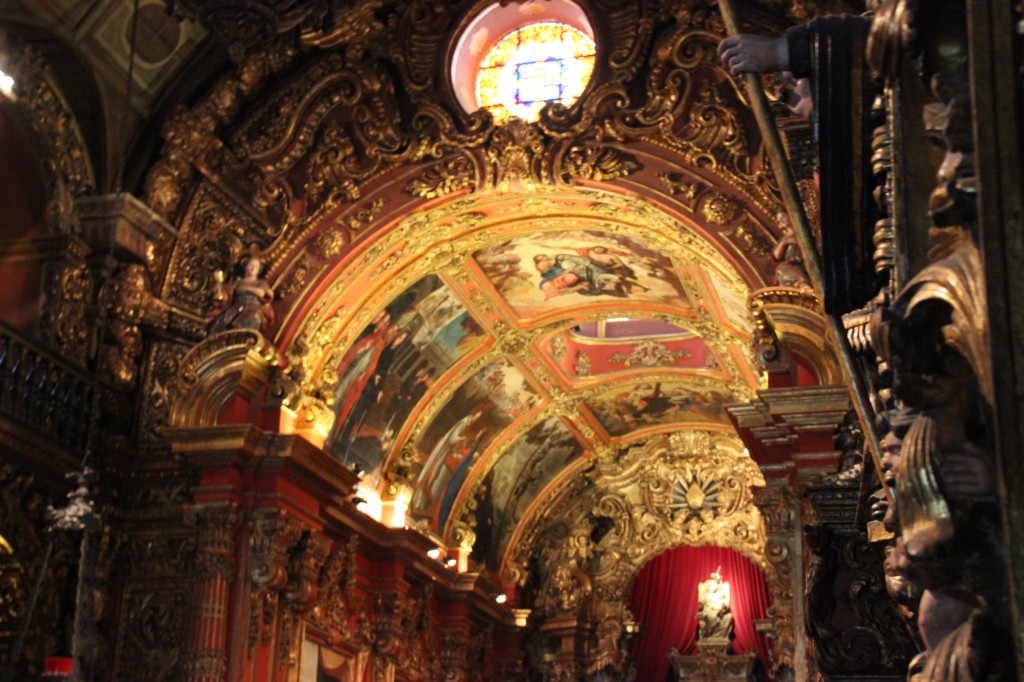 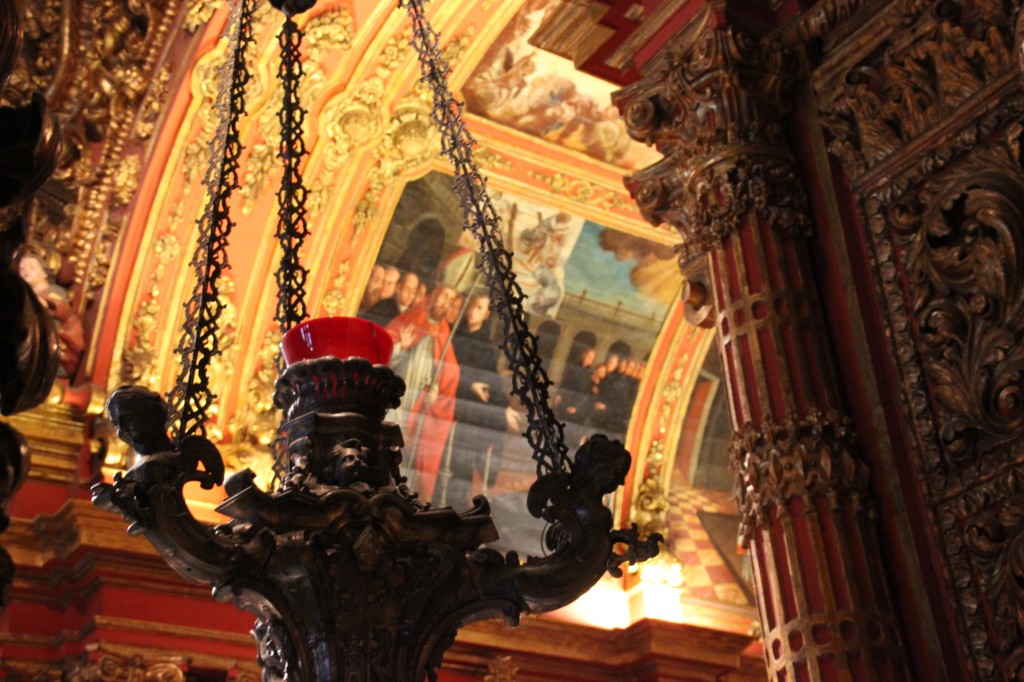 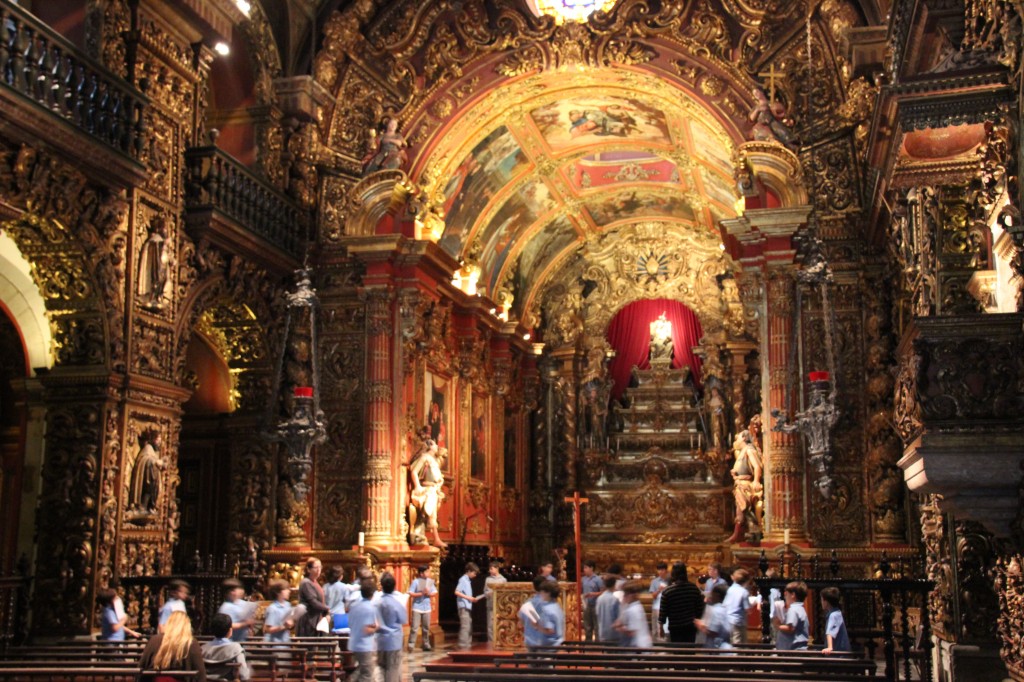 After the monastery we had a brief trip to the Maracana where the World Judo Championships were taking place. Surprisingly we didn’t watch any but it was good to see the stadium almost finished (this is something of a running joke for Brazilians who have been told it is almost finished for about 12 months now): 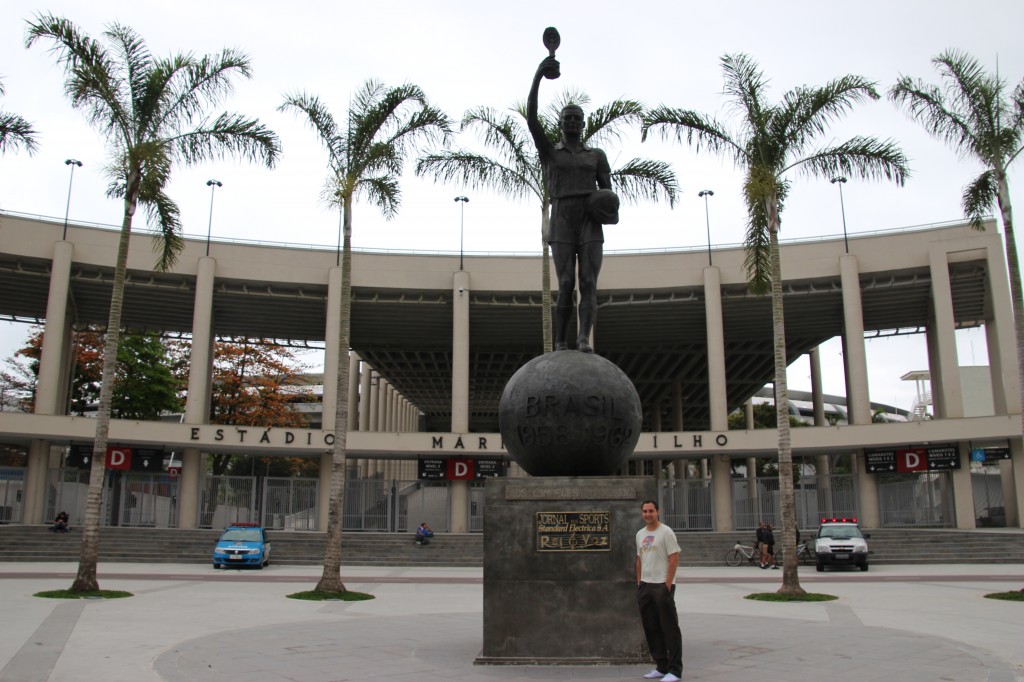 We took in the Samba stadium where Carnival passes through and the national library with row upon row of leather bound books (it did not smell of rich mahogany). Then it was to the new Cathedral which looked look a horrible concrete Chichen Itza from the outside but revealed something incredible once inside: 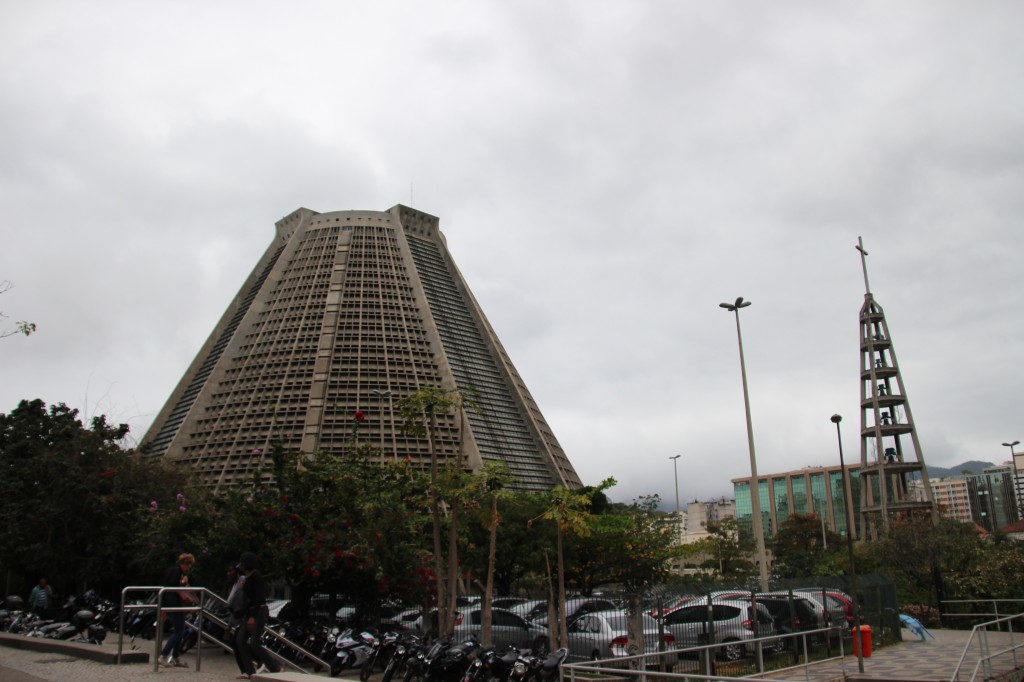 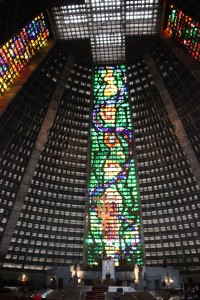 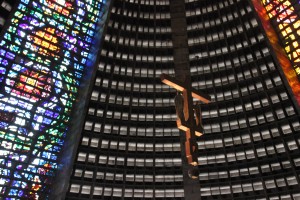 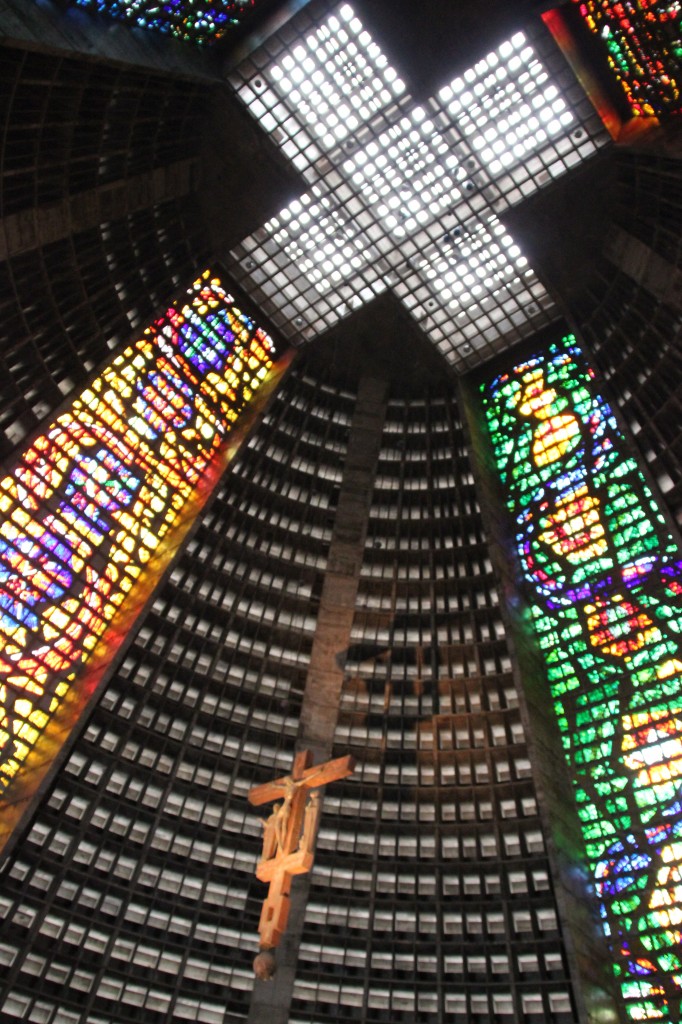 We then drove through the old city a bit more taking in a protest from teachers. No great surprise there – in Brazil teachers are only paid around 1000 Reais per month which is about £250 whilst politicians have recently granted themselves pay for 14 months of the year (in Brazil everybody gets 13 months pay) earning thousands and thousands.

Our next trip was to Lapa where the famous Selaron used to work his magic on a single flight of stairs that are now a place of remembrance and celebration of the man after he died (was killed) in January this year. He worked tirelessly and out of his own pocket to create something beautiful in a formerly tough area of Rio. He faced up to some of the unsavoury sides of the area and most Brazilians believe this is why he was killed: 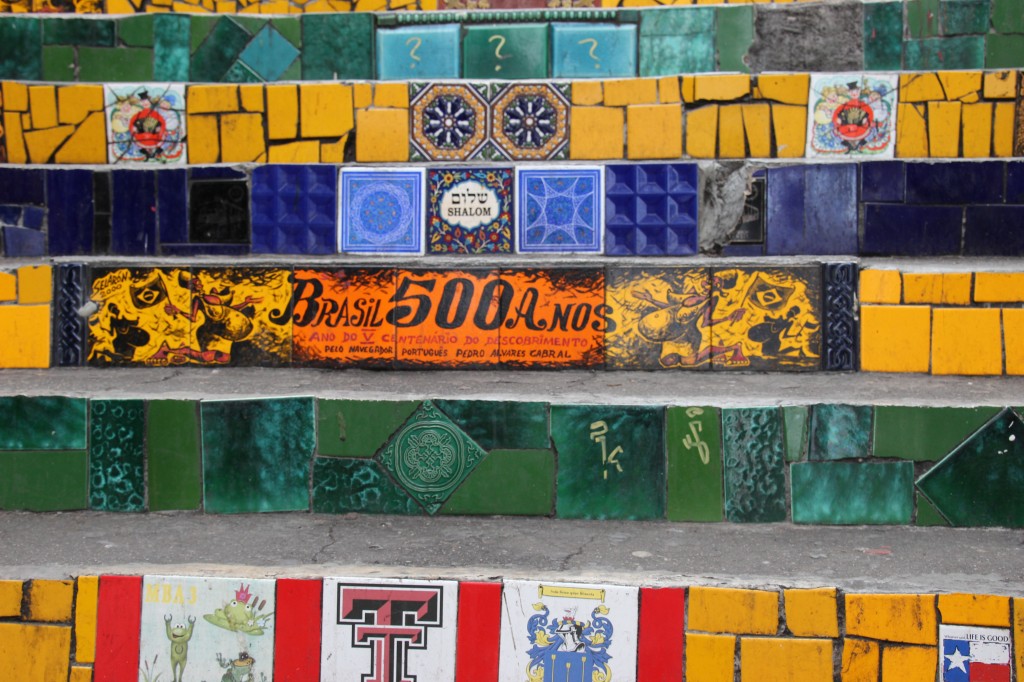 This was pretty much the end of our tour but we did have a lovely evening at Via Sete in Ipanema where a lamb burger with every relish and condiment under the sun was destroyed by Jen and I ate another fantastic steak as we polished off that lovely Malbec.