After a swift nine hour bus drive to Siem Reap we were here, the place that most people come to Cambodia to visit: the land of Angkor Wat and a hundred other temples. Built a long, long time ago (I can still remember how the music used to make me smile) sometime between the 9th and 12th centuries this series of once forgotten and abandoned temples show how life was lived in the old Khmer Empire.

We rocked up in Siem Reap and were swiftly tuk-tuk’d (verbifying) by Mao to The Mansion which was on the very outskirts of town and did a lovely line in quiet calm – well until the local packs of dogs smelt a rabbit or the local kids found their parents’ stash of Chinese New Year firecrackers. Mao was to be our tuk-tuk driver for the next few days to help us navigate around the many temples and given he drove a tuk-tuk he was swiftly named Chairman.

The temples around Siem Reap are pretty diverse (if you are a keen 9th-12th century South East Asian historian) and pretty awesome as well. There are big ones, small ones, some as big as your head. Round ones, square ones, some the shape of your head. Despite these descriptions what you rarely found were any heads at all. Nearly all of the heads from statues have been removed because when first built they used to contain priceless gems and jewels – well priceless until sold on the black market.

Out of all the temples Angkor Wat and Ta Prohm are the most famous. Agkor Wat is the largest and best maintained out of all the temples as it was looked after by monks for pretty much its whole history. It was an amazing place and also the first temple that we visited which was probably not the best idea. Almost every wall is inscribed with Sanskrit or decorated with caved murals depicting stories or describing how the place was built. Its size, detail and incredible design have to be seen to be believed and without a doubt one of the coolest places we have been to in our trip so far.

We also rocked up for sunrise which was pretty funny. As the moon and stars slowly gave way to the approaching dawn you could suddenly see the other 5,000 people all watching the sunrise with you where once it had seemed quite peaceful and romantic. 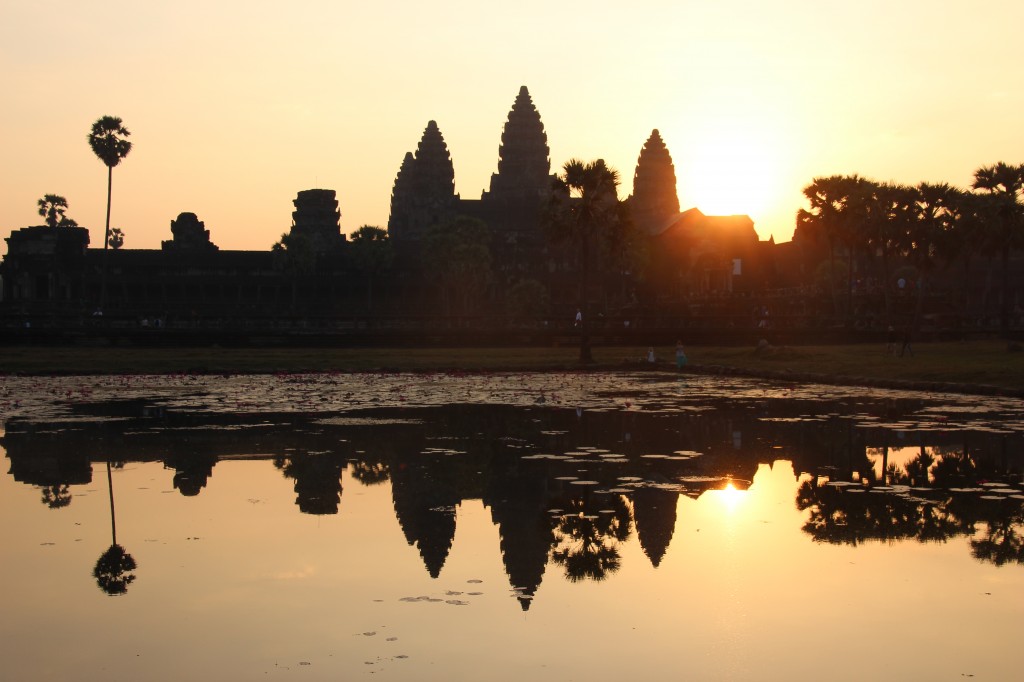 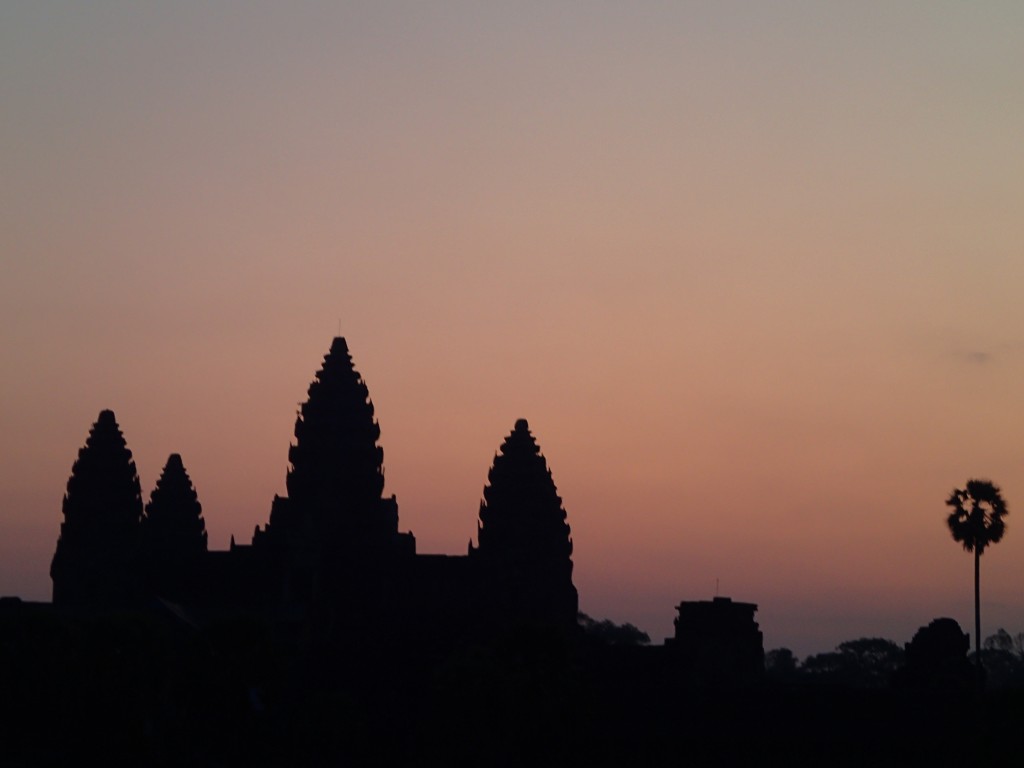 Ta Prohm is famous because Angelina Jolie ran around in it wearing very short shorts in the Tomb Raider film. As such nearly everybody who visits this beautiful temple half-enveloped by trees just stands and stares at this one point that she ran through once. For us though, we loved the quieter courtyards where you could enjoy the subtle light and the way that nature had attempted to reclaim this once impressive temple.

These were both great temples but we really enjoyed visiting Preah Khan which is one of the biggest temples but was visited by a surprisingly smaller amount of people. There were many spots you could disappear to and not see another visitor for at least 3 minutes. We could have explored there for several hours but there are just so many to see and enjoy.

Those in the know always suggest visiting Preah Bakheng at sunset. We didn’t know all that much about it when we went to be honest. We arrived a good hour and a half before the sun was due to set and should have known something was up when the guide wandered off and said “I’ll meet you down there”. Slowly we started to work out why. Within half an hour the place was absolutely rammed. I’m not talking sardines here, I’m talking canned tuna. It was a decent view, nothing more, nothing less but the effect of about 3,000 people jostling and clicking their cameras completely ruined any peace or spirituality that might have been gleaned from watching the sun set whilst sitting on a 9th century temple. If going to Angkor – do not bother with Phnom Bakheng at sunset!

One of our best experiences; however, came chatting to a monk called Hun near one of the more distant and perhaps less impressive temples called Lolei. Hun is studying at University at the moment whilst also teaching local orphan kids at a school that he and the other monks have built using contributions from visitors and a few small companies. He showed us the classrooms and was interested in Jen and what she taught and how she taught English. The school website can be found here if you would like to know more about his work: www.ufriendshipschool.org It was a real pleasure chatting to him and we wish him and the school all the luck in the world.

After the temples we would retire to “The Mansion” (!) most often for a quick swim to freshen up before showering and hitting the town! Here’s something you may not have expected: Siem Reap is a seriously lively town in the evening. There’s even a street called Pub Street.

Neon lights everywhere, more market stalls than there are tourists and some awesome (and some lousy) restaurants. I also decided it would be a good idea after a couple of large Angkor beers to have my hair cut in a market by a quite clearly drunk hairdresser. Still, what could go wrong!

Siem Reap and the temples surrounding the area is an incredible place to visit and we will take back many memories of these great places. Luckily for all of you, this is my last post for a while as Jen (for obvious reasons) will be covering our time in Myanmar. So cheerio from me for a few weeks.