Like a backpacker’s Mecca, Sydney Harbour slowly unfurled into view from the Greyhound window. Cue the sound of 40-odd cameras clicking as the whole blooming coach woke from their stupor and realise that WE’D ARRIVED.

For many travellers (ourselves included) Sydney was the last stop on a 2,400+ km journey down the East Coast of Australia that started in Cairns. The oh-so familiar sight of Sydney Harbour Bridge and the famous Opera house was definitely a sight for sore eyes after a good few hours on the bus.

After a lovely pick-up and welcome from Tony and Emilia, whose gorgeous harbour-view flat would be our home for the next few nights, Nick and I got our glad rags on (more rag than glad admittedly after 4 months in a backpack) and hailed a water taxi (Christmas treat) over to Watson’s Bay for a sunset fish supper at Doyle’s restaurant.

We managed to eke out one bottle of wine over several hours in order to catch the best views of the city as the sun gradually got lower and lower and finally departed. A most beautiful introduction to Sydney.

Our first full day in Sydney was rather taken up by a few errands, namely getting our camera fixed (the team at Olympus deserve our huge thanks for being so fantastically helpful – not only did they fix our camera for free but they also rushed the job through so that they could give the camera back to us before closing their office for Christmas: what heroes!) The day was not completely wasted though as Tony and Emilia took us out for a fantastic meal in Manly where I had proper Scampi for the first time (ie. Batter free and the size of your head)!

Day 3 saw us at Taronga Zoo, having walked over the bridge to take the ferry from Circular Quay. Heck it was hot. For much of the trip we wanted to take a leaf out of the animals’ books and curl up in a ball in the shade, but luckily the fantastic views back to the city kept us stomping around and I finally got to see my first koala (having had them elude me the whole of the East Coast).

The heat of the day built up to thunder and lightning later that evening, which we spent wandering around the ‘bizarre Christmas fair’ in The Rocks, and then at cracking Chinese dinner in the wonderfully named Wooloomooloo. 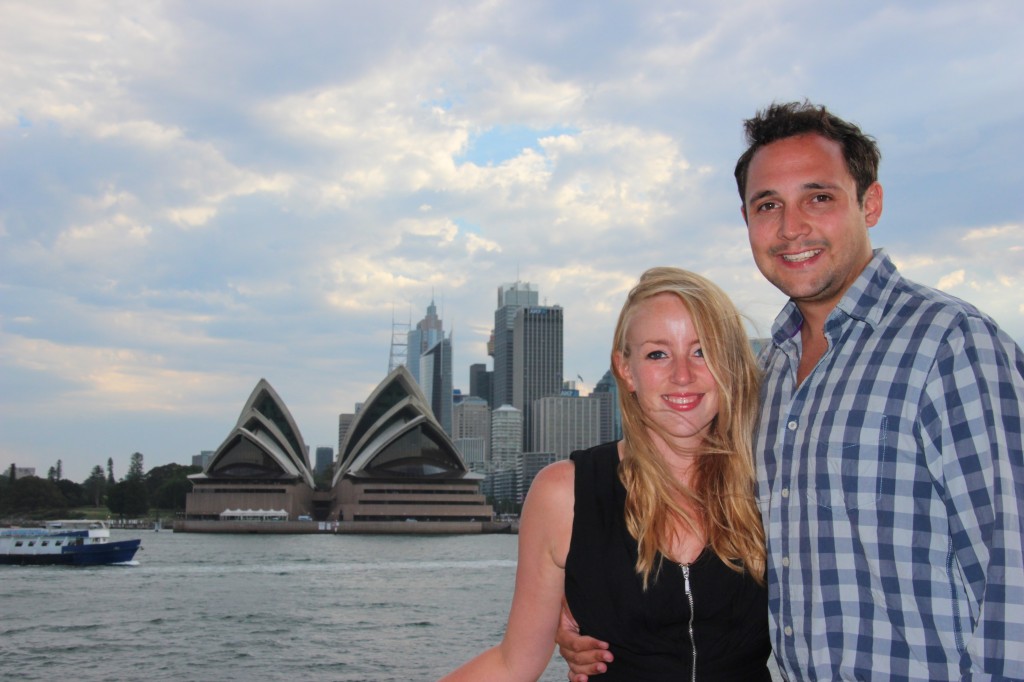 For our last 2 nights in Sydney we stayed in Darling Harbour which proved to be another brilliant base and from which we could watch the Christmas fireworks.

From there we took a boat up to Parramatta, seeing fantastic views of the river along the way. We also did another walk over the bridge to Nick’s old family home in McMahon’s Point, stopping off at his old haunt ‘The Commodore’ for lunch, before heading back in to Central City.

Once Central we spent a fascinating (though Nick will find that description debatable) hour or two in the Hyde Park Barracks, a museum that depicts life as it was for the various convicts and immigrants that were housed there over the years.

This was followed by a rather mad half hour in a crush of Sydney Christmas shoppers (maybe a bad idea) as we went to see the Christmas tree in the Victoria Building, or the Strand, as it’s also known. It was admittedly very beautiful so worth braving the crowds, but I still reckon it doesn’t hold a candle to the unsurpassed Victoria Quarter in Leeds (google it!).

Having had a good old stomp around Sydney (and knowing we would return post-Christmas) we didn’t feel too guilty about spending our last night in Darling Harbour curled up on the sofa watching Love Actually, a rather necessary injection of Christmas after spending the last few days at the unseasonable temperature of 34 degrees. The Christmas spirit was also greatly increased the next morning on our early flight back to Auckland when we were unexpectedly upgraded to business class and very happily tucked into aptly festive bucks fizz at 7.30 in the morning.  This followed by a lovely welcome by Neil and Nick’s Grandma Betty at the airport (all the way over from Preston in her 90th year, no less!) equalled a great start to Christmas!