We arrived in the midst of a rainstorm in Cairns after two short flights and felt what it means to be tropical. Sweltering, hot, humid but with the promise of the Great Barrier Reef just a boat trip away. After sorting out the hostel we decided to book our boat trip out to the reef and went with Sea Quest or Deep Sea Diver Den – hard to tell which it was called.

It promised two points to snorkel and resident massive maori wrasse like the one called Elvis in the Whitsunday Islands I remembered from 10 years ago. We thought that would do us nicely and booked the blighter.

Getting up early in the morning we got on board and went through the various safety briefings. As always we were on the early side of early so had to wait in the scaldingly hot sun for all the other guests to board. Many around us were visibly melting having had a few more drinks than us the previous evening.

Never fear for an hour and a half later we were there, on the reef. The bloody great massive barrier reef. According to sources it is as long as the West Coast of America and larger than the state of Idaho and perhaps more relevantly the UK. We were just seeing a small part but strewth (tie me kangaroo down sport) it was beautiful. With no wind and broken sun the visibility was at something like 20m – incredible scenes.

It was also our first experiment with a new toy. The underwater camera. With Jen’s small camera now almost useless due to the fact I left the charger in Kyoto we needed either a new charger (they cost a fortune) or a new camera and thought why not. With a lot of our time spent near the coast over the next few months it made sense. It is pretty much point and click and over time fingers crossed we can take some decent photos!

The first jump in was nice and calm and we both made it in to the bath warm water safe and sound but were quickly confronted by a small stingray floating underneath us. It wanted nothing to do with us and we were quite happy not to make closer acquaintance so off we floated over the reef. We saw parrotfish and surgeonfish and other fish and lots of other fish. Here are some photos… 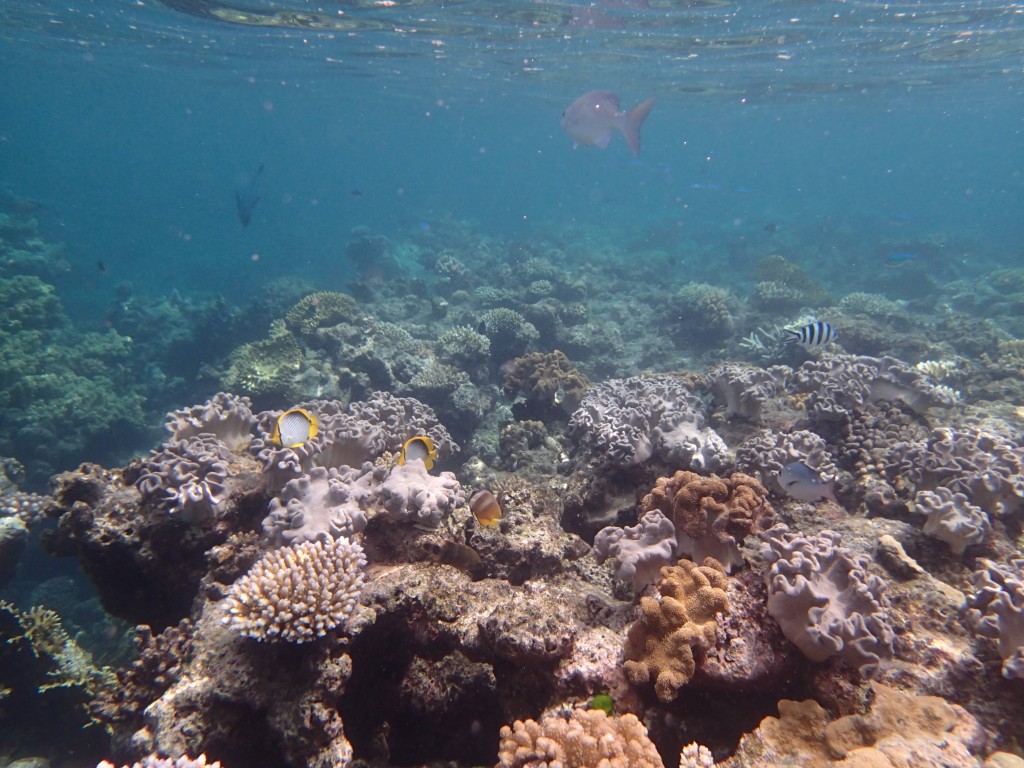 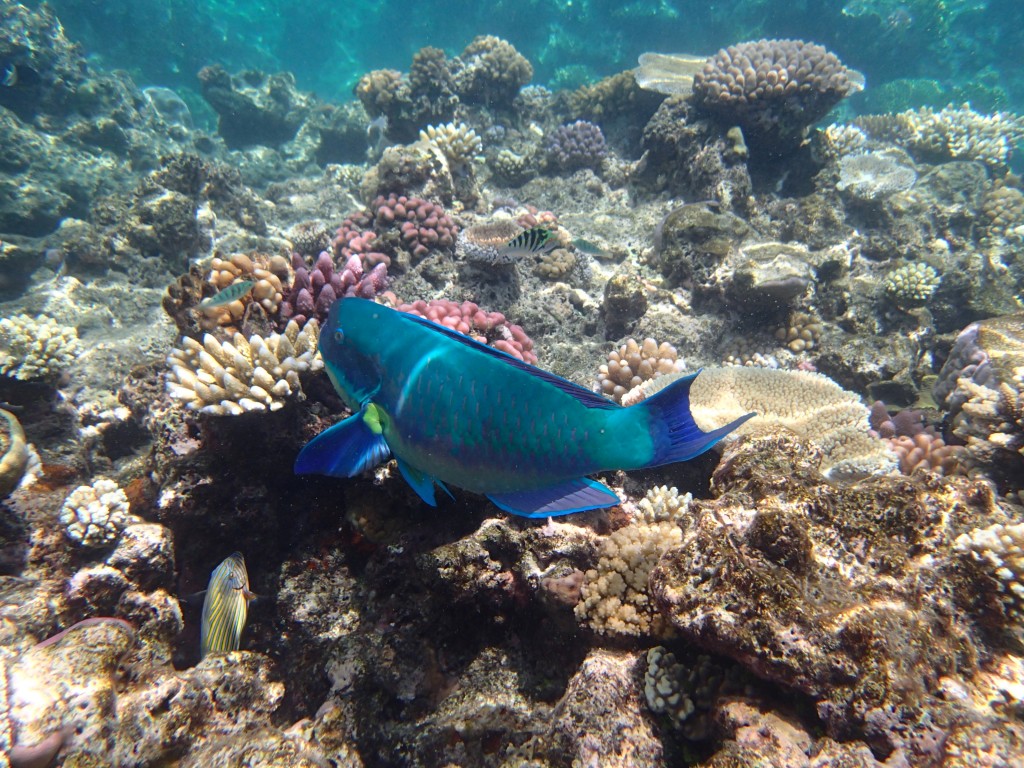 After a lovely salad, fruit and sandwich lunch accompanied by hot chocolate we were back in the water and immediately saw the giant maori wrasse of legend. An inquisitive soul he hung around the boat throughout and we both tutted as other backpackers went down to stroke the poor fella.

Next we swam out over a beautiful reef that had some kind of black and white version of Nemo, a few white tipped reef sharks – or the same one a few times, an enormous eel that a Norwegian girl pointed out to us and said “there’s, there’s, there’s a monster there”. It was a stunning spot and we saw triggerfish and little tiny blue fish of the colour only fashion folk could describe. They were blue, really blue. Seriously though they were very, very blue.

The reef itself was beautiful with stunning corals of the soft and hard variety, big and small, delicate and hulking. It was with great regret that we had to swim in when they blew the whistle but the idea of spending a night on the reef in the lovely water didn’t seem too hot.

We cruised back to land with great big smiles on our faces before stuffing ourselves with some pretty good Japanese food and sake. Om nom nom.

The next morning was up early for our 7 hour bus ride to Townsville where we stayed for one night before heading on to Airlie Beach. A place that I lived in for a few months a long, long time ago.