Something we’ve learnt on this trip is that bad reviews can actually be surprisingly truthful, but they often shouldn’t stop you from going ahead and booking something anyway.

A great example: our train journey from Yangon to Mandalay.

When debating how to get to Mandalay we dutifully did our research and came up with 2 options: the slightly faster, slightly cheaper bus option; or the train, the main advantage of which is that you can book a sleeper ticket and actually get a flat bed for the night. We went for the train. During our online research we’d come across many comments warning that despite offering ‘sleeper’ tickets, you will in fact NEVER get any sleep on a Burmese train, due to the sheer bumpiness of the track, and that noisy train noise (yes really) that so follows.

Well, that turned out about right. On the 15 hour journey from Yangon to Mandalay we definitely got less than our usual 40 winks, but really, who cares when you get to spend 15 hours trundling through the gorgeous Burmese countryside?

The train was a deliciously old fashioned one built by the British a long time ago. The sleeper compartments held four cobwebbed bunks as well as two huge windows, great for picture taking (and filling your face with soot when the urge to stick your head out got too strong).

Although there was apparently a restaurant car, the bumpiness (yes it was really really bumpy) prevented us from daring to cross the precarious looking divide between carriages, so we never saw it, however food hawkers (nimbler on their feet) went up and down the carriage and we were able to grab some incredibly sweet caramel / sesame /cracker type things for our dinner (gutted that I missed out on samosas). The bumpiness also made going to the loo an adventure in itself – in true Asian style this was a basic hole over the ground; the whole ordeal made much more exciting when the train carriage is careering all over the shop.

Along the way we saw a great many villages and farmland that seemed pretty untouched by the modern world. Most of the houses were built of bamboo and wood and electricity lines were scarce; oxen and bicycles were in place of tractor and cars.

Intermingled pagodas and paddy fields both reflected the sunset wonderfully, allowing us some gorgeous views as we bounced along.

We arrived at Mandalay for a dark 6am but the hotel we were staying in were able to check us in before breakfast, enabling us a quick nap before heading out to explore the place.

Mandalay is one of those places that conjures exoticism with its very name, but unfortunately the concrete block reality of the city falls a little short. Luckily we were staying in the quieter end of town, a short walk from the old Royal Palace, where the somewhat untouched streets are laid with sand rather than tarmac and pavements are none existent. The lack of mopeds on all but the main roads made for rather nice wandering about, so on our first afternoon we headed to the Royal Palace, stopping on the way for a typical Burmese lunch of curry with multiple and unidentifiable side dishes. 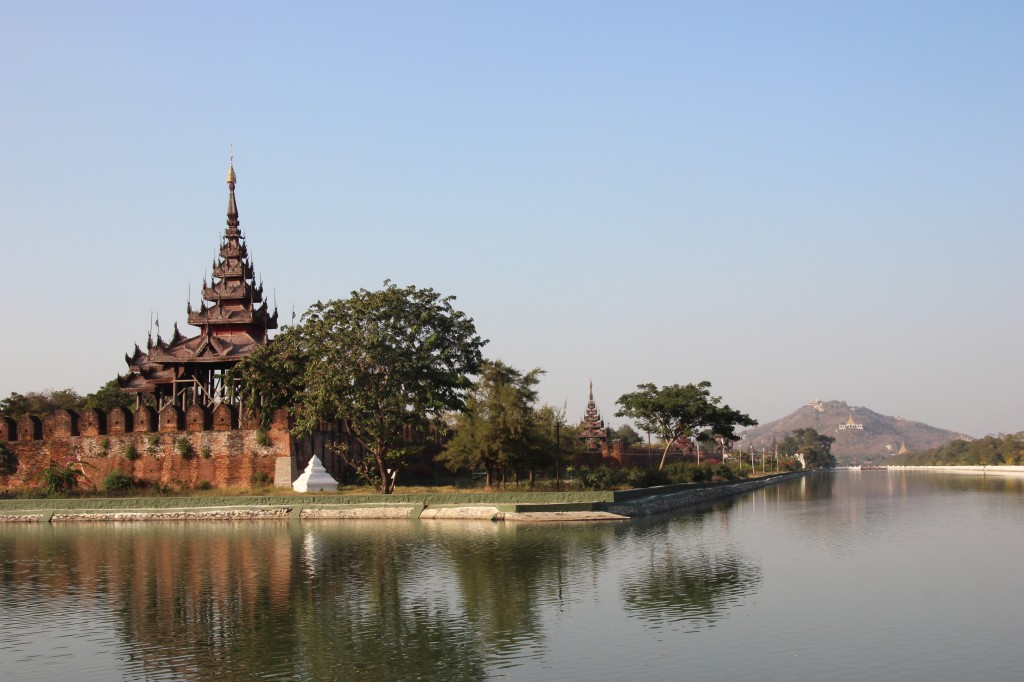 I was especially interested in seeing the Royal Palace having just read Amitav Ghosh’s The Glass Palace (highly recommended!), which starts with the British conquest of Myanmar and the deposition of the Burmese Royal family in 1885. Following the family’s exile, the British Army moved in to the palace and turned much of it into, amongst other things, an Officers’ Club and a polo pitch. You can still see the polo pitch. These days there are really strict rules about where foreign visitors can visit within the grounds (the palace is surrounded by walls, 2 km long on each four sides), but we were still able to walk around the main audience halls of the King and Queen, as well as the glass palace itself (although not much remains of the glass panelling!). We also had a great view from the top of the watch tower of the rest of the city and Mandalay hill.

In the evening we tried to find Chinatown and I’m not quite sure where we ended up, but it was very blue, the food was good and the man who served us was a Chelsea supporter (and had a great laugh shouting players’ names at Nick).

Having heard that the charms of Mandalay all actually lie outside of Mandalay itself, the next day we decided to venture further afield and booked a daytrip to the surrounding villages. We started off with Mahamuni Paya, a pagoda (but of course!) that had a rather interesting market around it (full of lacquerware and teak furniture), as well as a buddha that has a gold plate coating of 6 inches thick. One of the most interesting things about visiting these pagodas is the human element of seeing crowds of people clearly visiting from different parts of the country. Amongst them we saw Shan people, in very distinctive outfits of black clothes and brighter, often red or orange, headdresses.

Next stop was Maha Ganayon Kyaung, a Buddhist Monastery in Amarapura. The monastery is huge, holding several thousand young monks, and, it seems, even more tourists! It turned out that our taxi driver had taken us there just in time for the monks’ morning meal, at which point herds of tourists turn up to gawp at the monks eating their silent lunch. We got there about half an hour before lunchtime, just in time to see the building crowd milling around the monastery, sticking their zoom lenses into the monks’ bedrooms and even the occupied shower blocks. We felt intensely uncomfortable being part of the crowd, but took a quick peep into the kitchens – by far the most interesting part in our opinion – with vats of vegetable curry sitting around on the dirt floor, mounds of chopped garlic and ginger sizzling away in pans bigger than my arm span, and crates of fried fish being stalked by a tiny kitten. We broke our self-imposed no photos rule, took a picture of the kitten, and scarpered before the monks sat down to eat, just as another coach pulled up in the drive.

We then headed to U Bein’s Bridge, the world’s longest teak footbridge (admittedly a small category), and a familiar view thanks to its rather iconic image gracing the front cover of The Glass Palace.

No other tourists to be seen, we were immediately approached by a boatman who offered to row us across the flat lake (the idea being to walk back over the bridge from the other side). This was wonderfully peaceful, and we paused often to take photos and to let a group of fishermen (and women) pass as they silently waded through the chest-height water.

On the Eastern side we sat under palm trees at a lakeside bar and drank fresh coconuts (yep, smug), watching the foot traffic cross the bridge and teenagers diving in the shallows with knives between their teeth, stringing fish along an attached wire as they went.

We then headed up into the nearby village, passing stalls selling barbecued crab and some kind of shrimp pakora, as we made our way to Kyauktawgyu Paya pagoda. This pagoda had some rather fine old frescos decorating the passageway walls, but we didn’t want to linger too long as it seemed to be the local teenage haunt (much better than your local park swings). On the walk back to the lake we were accompanied by a group of school children who engaged us confidently in conversation as we walked along, asking us everything from where we were from to what our names were before leaving us with shouted goodbyes, at which point we were met by a group of young men on mopeds who did exactly the same thing. Everyone was nothing but friendly.

Having enjoyed our coconuts so much we headed back to our lakeside spot for lunch (fried fish twice the size of whitebait, fried rice and fried noodles, with fried egg on top – oh dear) before walking the just-over-a-kilometre bridge back to the Western shore.

We took our time on the bridge. As we were heading over, a fleet of fisherman suddenly appeared, powering across the lake (and directly underneath us) with their haul from the morning. We also took a look at the vegetable gardens that spring up around the bridge at this time of year, when the dry season means that the water level is low. 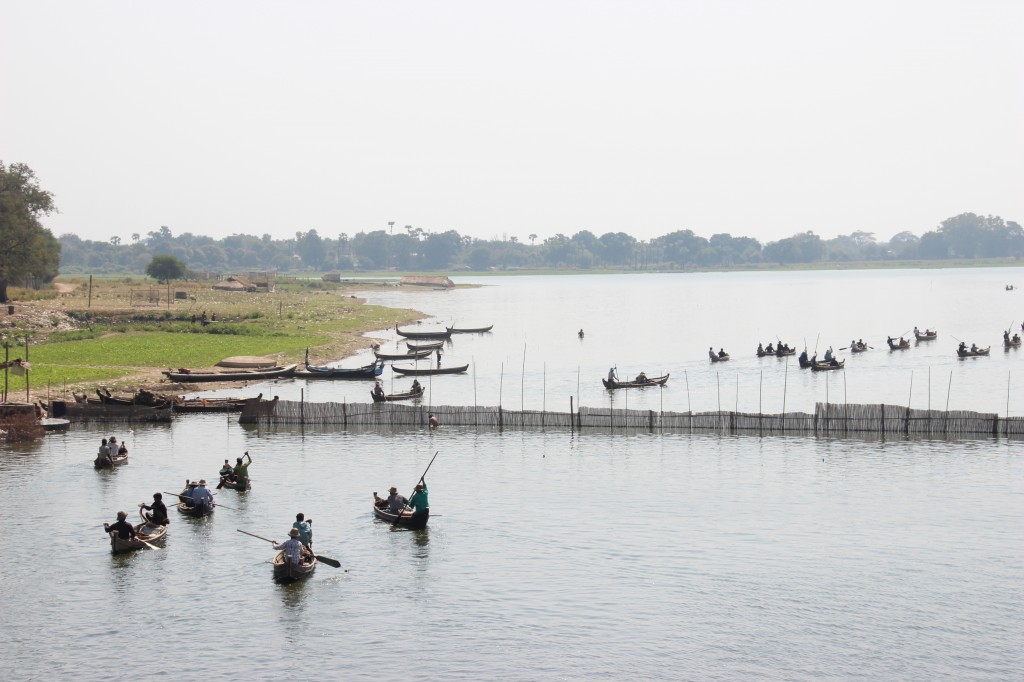 Our taxi driver met us on the other side and dropped us at a ferry to take us across a tributary of the Ayeryarwady to Inwa village. The village has held the title of Burmese capital no less than 4 times since the 14th Century, but now offers the perfect rural contrast to nearby Mandalay. Most people visiting Inwa will do so by horsecart – an hour long jaunt (bumpiness again) around the beautiful (and incredibly quiet) fields punctuated by the odd stop at a crumbling pagoda. It’s easy to see how the horse and cart would, until very recently, have been a commonplace reality of daily life for villagers; and even though there are still ox-drawn carts rather than tractors, and hardly any mopeds, there are now just enough tourists to make you realise without a doubt that life has very definitely changed for the people of Inwa in the last few years, and there ain’t no going back. 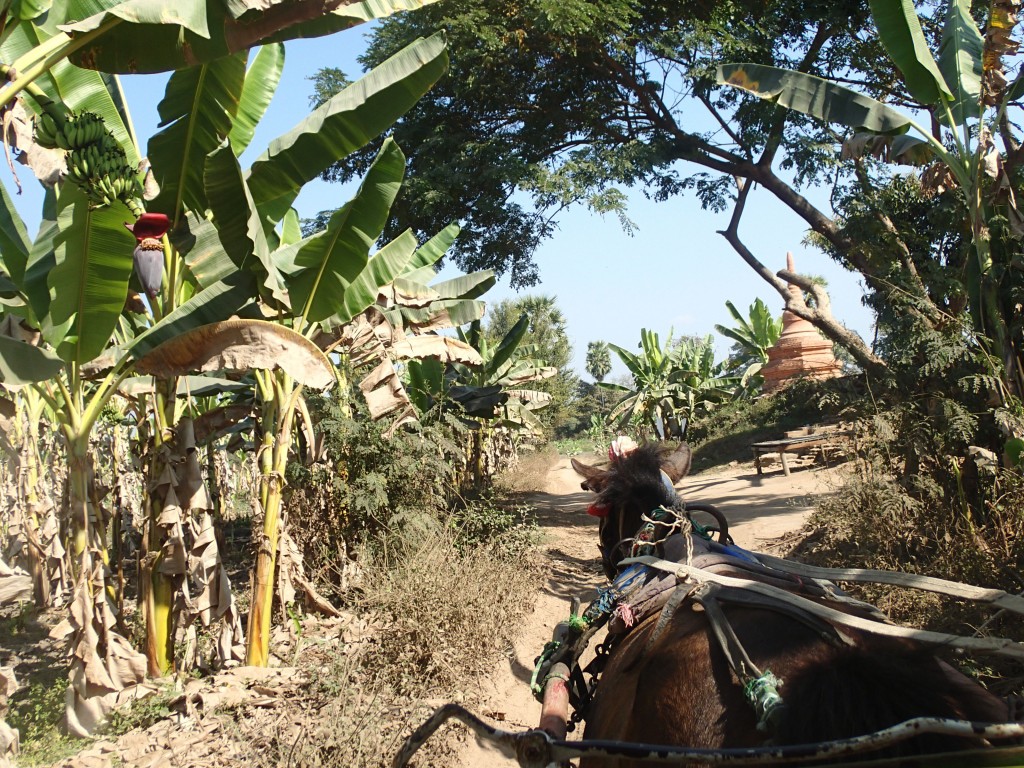 This is something that I’m sure we’ll see all over Myanmar. In many ways, the appeal of the country is its rare, ‘untouched by the West’ quality and as mentioned, in many ways parts of the country are somewhat stuck in a timewarp that we can view nostalgically, or even as an idyll. However, it can be uncomfortable to think that the very things that make Myanmar so attractive to us as visitors, have been preserved to the detriment of a repressed and subjugated Burmese population. Include in that the fact that as tourists, we are in a (huge) way responsible for the now changing ways of life throughout the country, and it can feel hard to justify parts of our trip. 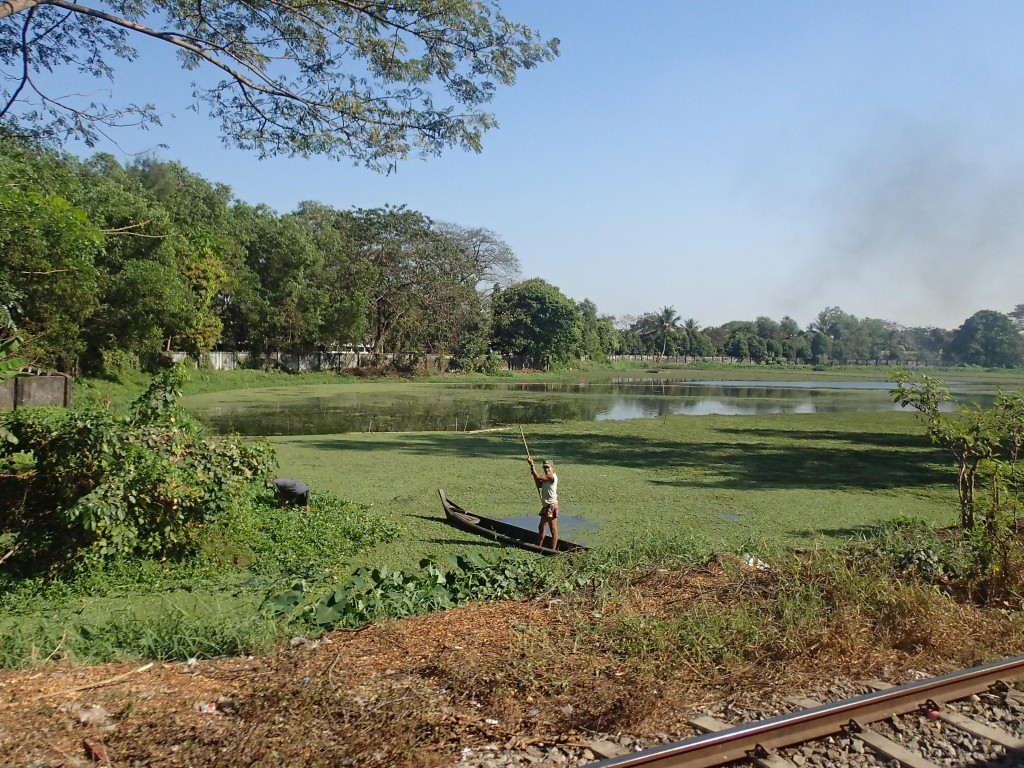 It helps then that we have been met with such a warm welcome wherever we’ve been; a welcome has seemed utterly genuine and has involved absolutely no cynicism, as can sometimes seem the case in other more traditionally tourist trodden routes of South East Asia. At the moment, the people of Myanmar seem happy to have us here, and we feel incredibly privileged to meet them, and to visit such an amazing country.

NEXT TIME: Balloons over Bagan!