Having dragged ourselves away from Full Moon Village the journey back to Ho Chi Minh City was an emotional (we were mainly close to tears at the scarcity of toilet stops) but rather stylish one; riding high as it were on the top deck of a futuristic sleeper coach. I call it futuristic because I’ve never seen anything like it before. Each person’s seat was basically in the shape of an individual lounger bed, the top level accessed by a ladder – great for views but a wee bit scary as we went over the bigger bumps (hence my water bottle flying across the bus). We made it back to the city just as it was gearing up for the evening, and the frenzy of traffic that met us was definitely a far cry from the quiet nights of our beach stay.

However, there was loads to do in our last full day together, so in the morning we set off bright and early for the tunnels of Cu Chi, a couple of hours drive out of the city. The tunnels are a huge labyrinth of underground passageways that were used by the Vietcong (as well as local Vietnamese people including small children and elderly villagers) during US assaults on the area during the war. Concealed by dense vegetation and jungle (which has been completely wiped out by the bombing and toxic raids) whole communities lived and fought in these dense warrens that were ventilated only by tiny holes in the ground every 20 to 30 metres or so.

On our visit to the tunnels we were able to go down into a tunnel and crouch / crawl our way through 120 metres or so (and we did well as most people chickened out after the first 10!) and we were able to experience how chest crushingly claustrophobic it was – at which point we reminded ourselves that the tunnel we were down is called the ‘eurotunnel’ as it’s actually been enlarged for tourists. The real deal would have been considerably smaller, and obviously without the intermittent lights that we had the luxury of. Nick and Dan were brave enough to lower themselves into the concealed entrances of one of the original tunnels – definitely not for me! 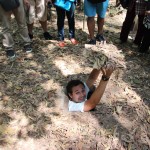 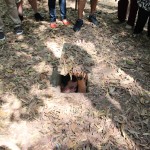 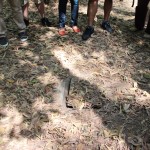 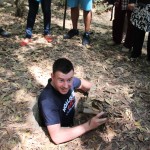 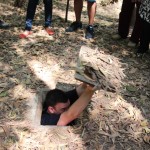 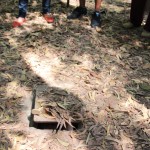 On the visit we were also shown some of the ambush style traps that the Vietcong would use on patrolling US forces. Most of these involved dagger sharp bamboo sticks, a hefty thwack and a considerable capacity for gore. Lots of it. Much wincing occurred during the (hypothetical) demonstration.

We also got up close to more familiar weaponry when Nick and Dan had a go on the rifle range. Sally and I stood by holding our ear protectors on tight and jumping lots; it was seriously loud. How loud it would have felt in real circumstances was inconceivable. 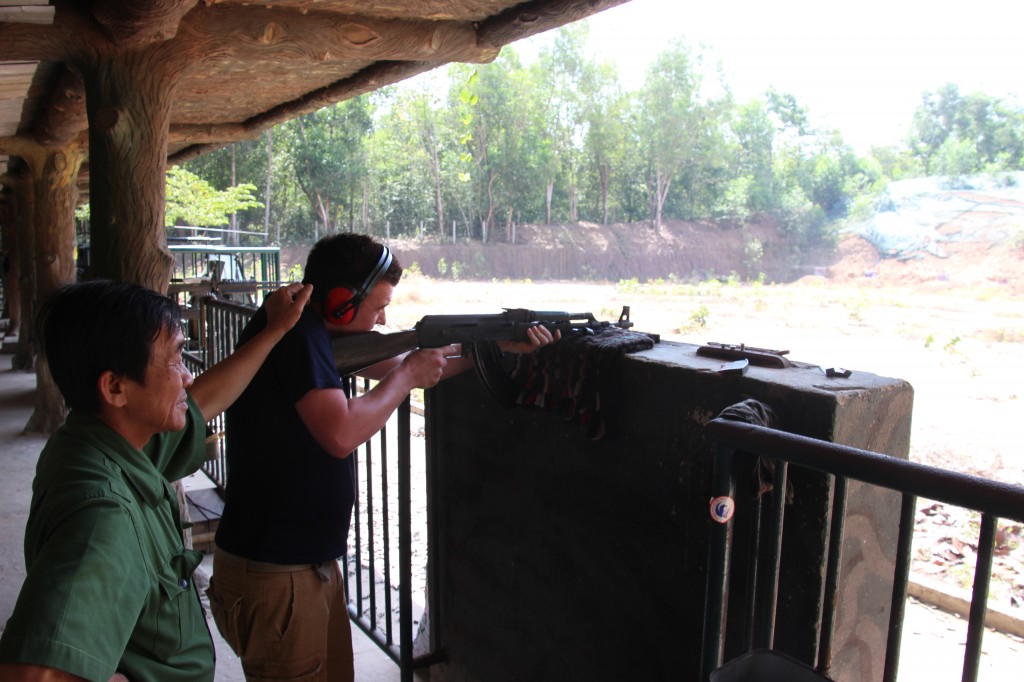 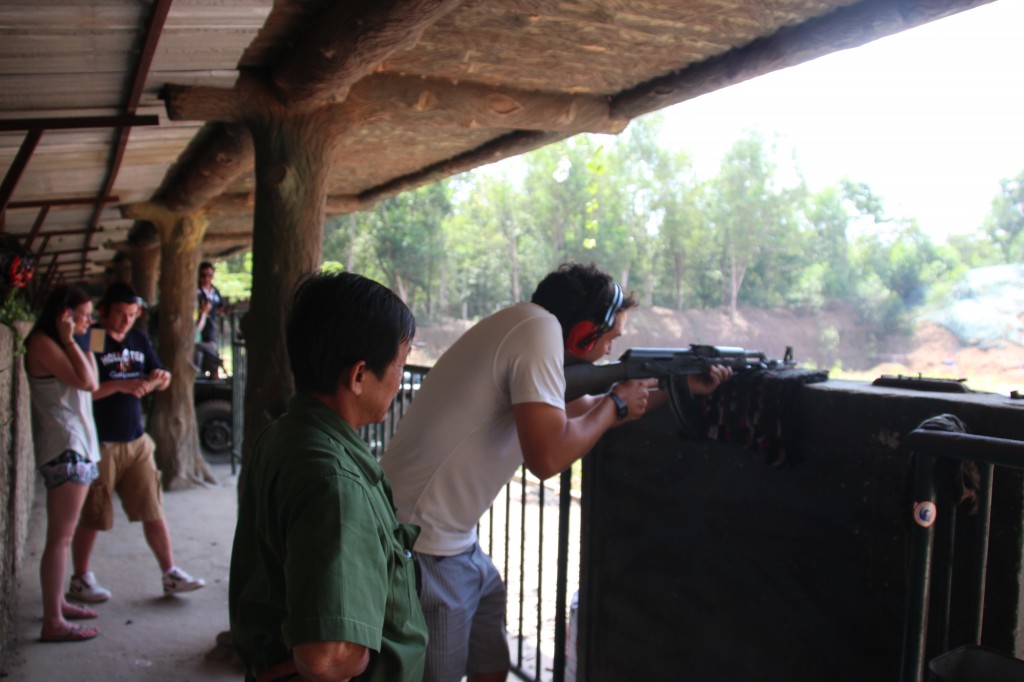 On our return to Ho Chi Minh we had a bit of a wander around the shopping street around our hotel, where it was really strange to see familiar shops such as Mango and the Body Shop next door to the knock-off shops selling designer clothes (including Mango) for haggling prices. A bit different to walking down a shopping street in London, as rather than dodging the crowds it was more about dodging the BBQ stands and the mopeds that kept mounting the pavement.

As it was our last evening all together we made it a bit of a special one and had a final engagement celebration altogether at ‘Chill Saigon’. This was a restaurant and bar on the 27th floor of a rather tall building, with views overlooking the city. A great place to drink cocktails (once you’ve got the right cocktail; we had to sample a few) and eat steak. And lots of cheese. We had a brilliant night, and although we were the only ones dancing, dance we did.

I like to end blogs on a high so I really should stop there, with general merriment on-high overlooking the city, but this was Vietnam and, as good and, dare I say it, luxurious a time as we’d had, we felt that we also had to spend time learning what we could about the country’s history and in particular the Vietnam War.

Nick and I had already visited the Museum of War Remnants when we’d first arrived in Vietnam, but it was the kind of place that is worth seeing twice, if only to let some of the reality of what you’ve learnt sink in a little bit. It’s probably not the kind of place to visit when seriously hungover and depressed on the last day of your holiday, as Sal and Dan were, but we took ourselves along anyway.

Explanation of the reasons behind the war are potent in their absence, and the museum contains a stark exhibition on the ongoing damage caused by Agent Orange, and the outrageous fact that whilst the US government has paid compensation to its own Vets who were affected, it still refuses to accept responsibility for the atrocities caused to the Vietnamese people by the poison. The harm done to generation after generation of countless families is a reality I hadn’t previously been aware of. There is also a moving photography exhibition ‘Requiem’ which is compiled from the work of multi-national war photographers, many of whom were killed in action (some of the shots on display were taken only seconds beforehand).

We left the museum no less hungover, but feeling much more thankful that all we had to complain about was a sore head.

After a final lunch together we had to say our goodbyes to Sal and Dan – thanks again to you both for a blooming awesome time! And we skulked back to our hotel feeling a bit bereft.

Nick cheered me up that evening though by randomly finding tickets to a rather random show – the AO show at Saigon Opera House. This was an hour-long spectacle by local performers that depicted Vietnamese culture and tradition through dance and music. It was fantastic, full of lots of impressive acrobatics – many involving balancing on bamboo poles – and interesting music. It helped take my mind off Sally and Dan taking off at the airport a few miles away!

We then spent our last night in the city by finally visiting the street market for food. We ordered far too many fresh spring rolls but they were pretty darn good, as were the pork skewers juicy off the BBQ and the beef fried with plenty of spinach. There: got the food description in. 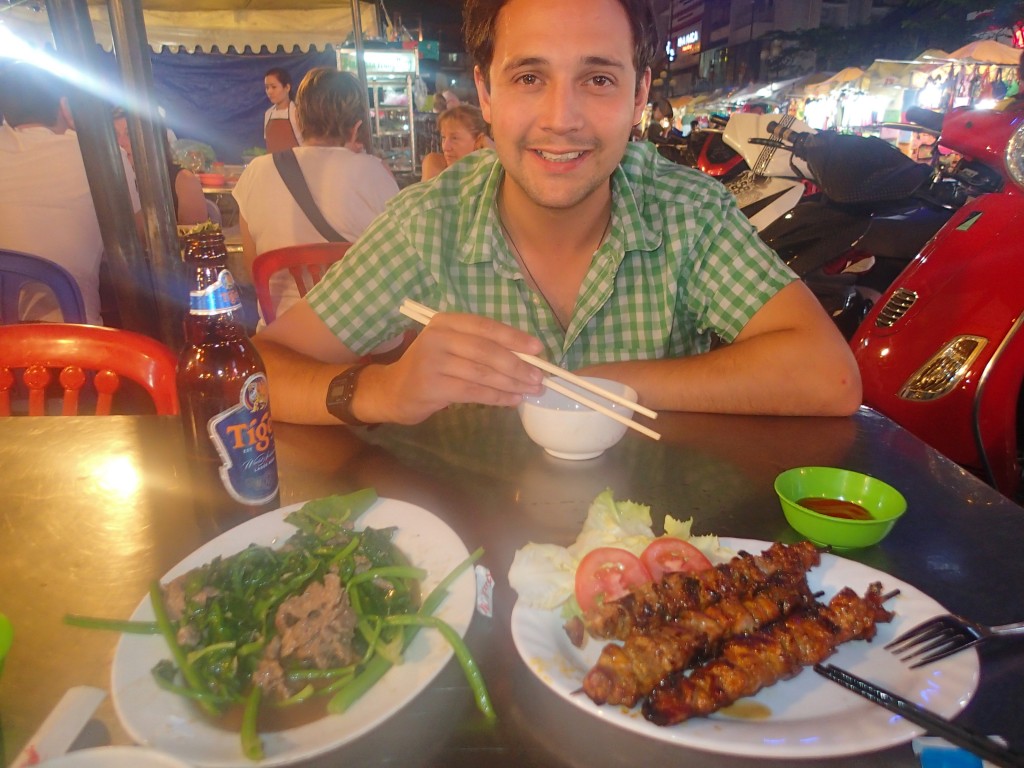 NEXT TIME: A ‘will we make it?’ moment up the Mekong.